Few days before, information regarding the upcoming Gionee A1 smartphone was leaked. And just now Gionee officially sent the press invitation of the Mobile World Congress (MWC) 2017 event for Gionee A1 and A1 Plus launch event revealing the information that there will be two smartphones under the Giones's new A-series of smartphones.

Gionee confirmed that the upcoming A1 and A1 Plus will be carrying Gionee’s product DNA, a nice front-facing camera for selfie lovers, dual rear cameras for better imaging and new features along with a long-life battery. 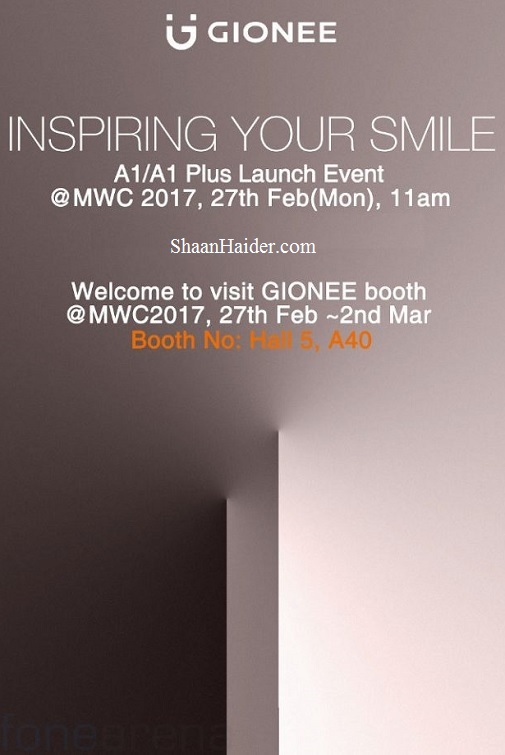 The teaser image in the Gionee MWC invitation clearly gives the idea that A1 and A1 smartphones will be available in two different sizes and Gionee A1 Plus will be the bigger version and maybe high-end variant in terms of hardware specs. The same also shows a very slim design of the Gionee A1 and A1 Plus smartphones.

According to earlier leaked information and rumors, Gionee A1 is expected to come with a 16-megapixel front-facing camera and dual-rear cameras. It features a 5.5-inch 1080p full HD screen and runs on the Android 7.0 Nougat OS. In terms of storage, Gionee A1 is rumored to sport 4GB of RAM and 64GB of internal storage.
There will be a fingerprint sensor along with a 4000mAh battery as well, based on the rumor. Gionee A1 Plus is supposed to have a bigger screen size, more RAM and bigger battery life than the Gionee A1.