8 months after launching its flagship smartphone Epic 1 smartphone in India, InFocus is going to launch another smartphone very soon. InFocus has sent the media invites for the launch of an upcoming smartphone that will be June 28th.

The media invite for the next smartphone of InFocus highlights the tag ling "Charge less, Do More" that clearly gives an idea that the device will come with a huge battery and capable of fast charging as well. But there is no mention of the name of the product in the media invitation. 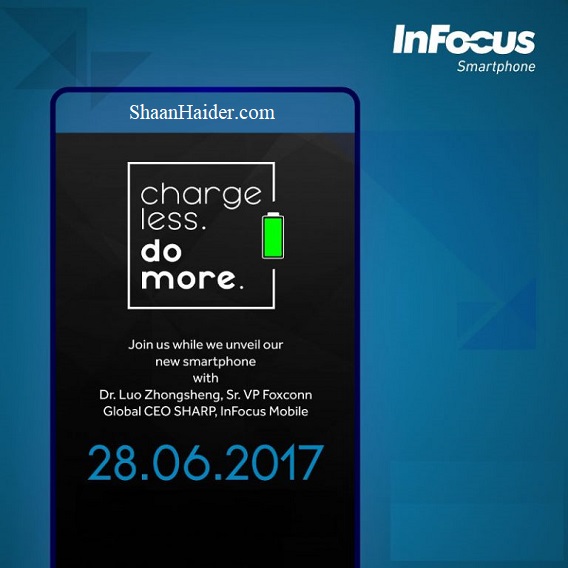 InFocus is also sharing many teasers of the upcoming smartphone on its social profile. A series of tweets again highlight the large battery capacity of the device.

According to teaser tweets, the upcoming InFocus smartphone battery is capable of providing 50 hours of non-stop music, 14 hours of GPS usage or 13 hours of video streaming in one charge.Since teasers do not mention any other specs and features of the device, it seems it will be a mid-range smartphone.

Can you use your phone GPS for 14hrs straight? #ChargeLessDoMore pic.twitter.com/WxhiWu3ohv
— InFocus India (@InFocus_IN) June 24, 2017

An another teaser shows a camera module on the back of the device but there is no fingerprint sensor shown. So either there will be no fingerprint sensor or it will be on the front side. The antenna lines are visible on the top and the bottom part of the back of the device along with the metallic edges, so hopefully it will have a unibody metal design.

Dr. Luo Zhongsheng, Global CEO for Sharp and InFocus Mobile will at the launch event to unveil the device.