One of the thing about which smartphone lovers always make hue and cry is the battery performance of the devices. With the rise in the amazing screen, power hungry processor and HD games, we are never satisfied with the battery backup of our smartphones.

Feature phones and low end phones usually perform better than the smartphones in terms of good battery backup. Maxx Mobile, which is one of the popular mobile brand for feature phones, has launched earlier a feature phone MX100 with a 4,400 mAh battery and now they are out with a brand new phone MX200 which comes with a gigantic 5,200 mAh battery. 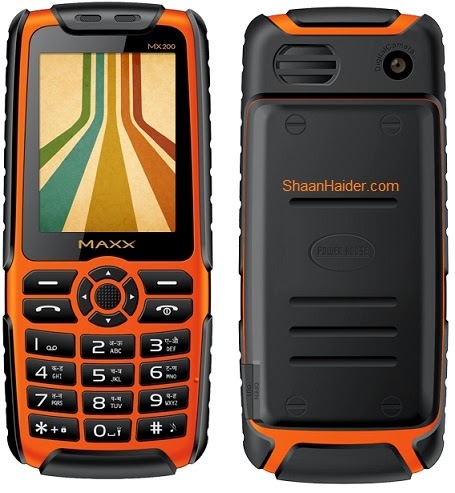 According to Maxx Mobile, their main consumer comes under semi-urban segment and resides mostly in rural areas of India. So, MX200 is designed to serve them well as power outage is common in such areas. The design of the MX200 is also tough and rugged to survive in outdoors. Other than the huge 5,200 mAh battery, Maxx MX200 also sports a VGA camera, expandable memory, dual SIM functionality and much more.

MX200 is launched under the Power House series of Maxx Mobile phones. One of the best thing about MX200 is that you can also use it as a power bank and charge your other smartphone and gadgets if needed. Below is the complete list of all the features and specs of the Maxx Mobile MX200 feature phone.

- MicroSD Card Slot and Expandable Memory up to 8 GB

Maxx Mobile MX 200 will be available in 2 colors, full black and orange with black. The price of Maxx Mobile MX200 is just Rs. 1,848 and it is available on the online retailer website Infibeam.