Sony has launched the RX100 VI (model DSC-RX100M6) camera in Saudi Arabia under its popular Cyber-Shot RX100 series of premium compact cameras. Along with the also RX100 VI camera, Sony also announced the VCT-SGR1 - a new compact and multipurpose Shooting Grip best suited for its RX0 and RX100 series of cameras . 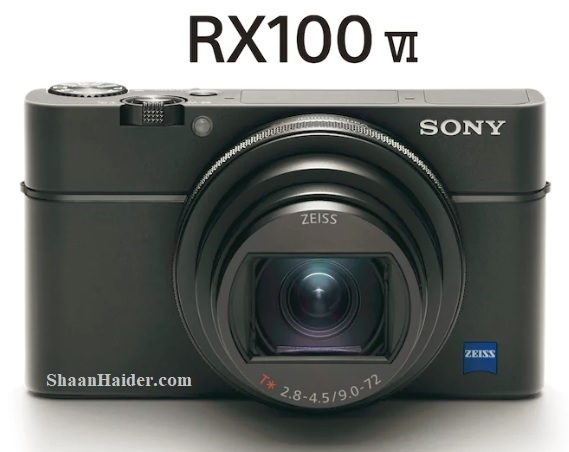 Sony RX100 VI also features a fast Hybrid AF system with 315-point Phase-Detection AF points on the sensor that cover approximately 65 per cent of the sensor and contrast-detection AF to provide the super fast focus speed of 0.03 seconds, the world’s fastest AF acquisition time for 1.0-type sensor cameras. It is capable of shooting at up to 24 fps at full resolution with continuous AF/AE tracking providing buffer limit of up to 233 images and can record 4K resolution videos with full pixel readout and no pixel binning.

The RX100 VI comes with two ED (Extra-low Dispersion) aspherical glass elements, eight aspherical lens elements and four AA (Advanced Aspherical) lenses that contributes in the imaging by high powered zoom lens of both 24-70mm and 70-200mmi focal lengths. The lens also features built-in Optical SteadyShotTM image stabilization that is equivalent to a 4.0-stop faster shutter speed and contributes in shake-free imaging and removes blurriness even in a low-light condition or while zooming in.

Sony RX100 VI is the first camera in the RX100 series to feature Sony’s advanced High-density Tracking AF technology, which concentrates AF points around a subject to improve tracking and focus accuracy. The popular Eye AF technology is also available with approximately 2x the tracking performance of the current RX100 series model . It also comes with the LCD touch focusing and touchpad focus point control that let users drag their fingers to select the ideal focus points of their choice. 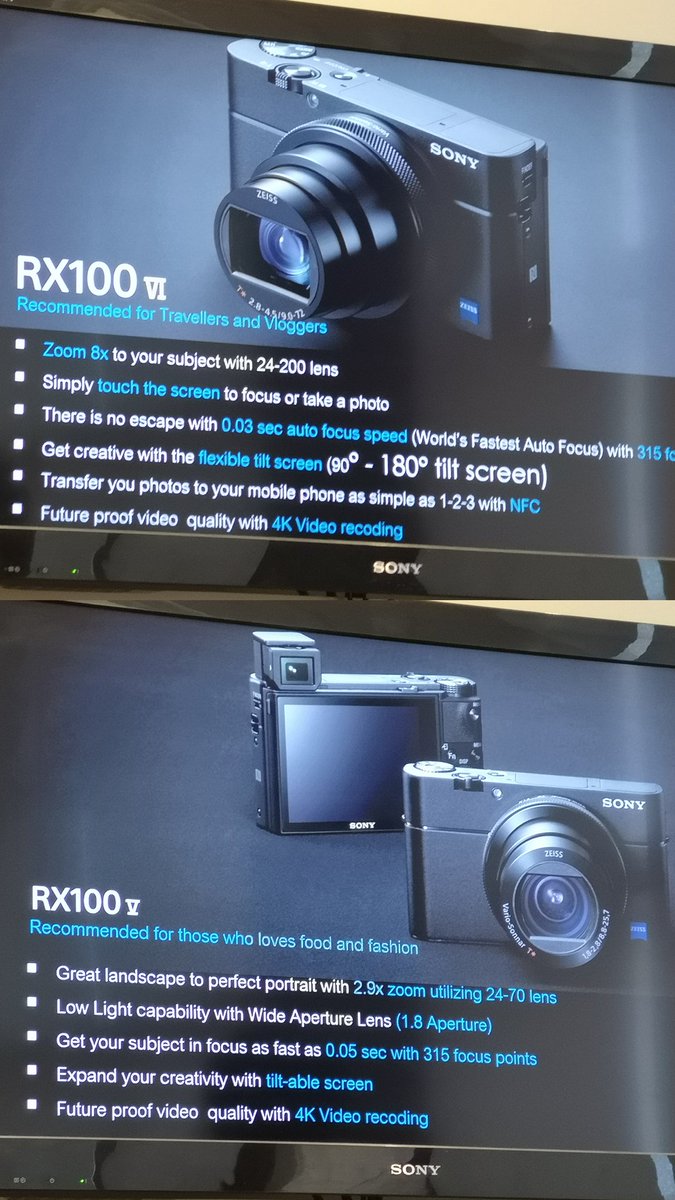 Sony RX100 VI also comes with a high speed Anti-Distortion Shutter with maximum shutter speed of up to 1/32000 second. It helps in reduceing the “rolling shutter” effect commonly experienced with fast moving subjects. An electronic shutter and a mechanical shutter mode, both are provided if required by the user.

This is the first time in a Cyber-shot camera that the RX100 VI features 4K HDR compatibility, thanks to its new HLG (Hybrid Log-Gamma) picture profile that offers an instant HDR workflow solution. Other than this many pro video features are included as well like S-Log3/S-Gamut3, 120p Full HD mode, Picture Profile, proxy recording and more. Sony RX100 VI is also capable of recording Super Slow Motion video at either 240fps, 480 fps or 960 fps .

Sony RX100 VI comes with a high-contrast 2.35 million dot XGA OLED Tru-Finder™ with ZEISS® T* Coating and the Electronic View Finder itself retracts in and out of the camera body based on user preference, and can be activated instantly by a single One-push Access button as well. The touchscreen of RX100 VI allows user to activate the touch shutter by tapping the back LCD screen. There is a zoom lever provided with customizable zoom speeds and the LCD that can be rotated 180 degrees upward or 90 degrees downward.


Sony MEA also launched the new VCT-SGR1 Shooting Grip for RX0 and RX100 series cameras. This accessory is a vertically-oriented shooting grip with adjustable angles 70 degrees up or 100 degrees down. It can be attached to Sony’s RX0 and RX100 series of cameras using Multi/Micro USB Terminal and is ideal for vlogging, travel photography, self-portraits.


The strength of Sony is that we develop all key camera components such as advanced image sensors, image processors, lenses and software algorithms in-house. The new RX100 VI is the latest in the premium compact RX series, with advanced capabilities that combine extensive zoom, professional image quality and the versatility for still image and video.

The sleek design and long zoom lens make it particularly useful for travel and lifestyle photography enthusiasts. Given the growing number of travel and lifestyle bloggers in the UAE, we believe this product will be a valuable addition to the premium compact camera segment, setting a new benchmark in performance, functionality and design.

The price of Sony RX100 VI is 4,899 SAR and it will be available at Modern Electronics stores across the Kingdom in La Terra Mall and International Market in Jeddah; Dar Al Wakalat, Akariah 3 Mall and Granada Center in Riyadh; and Dammam store from 5th August.

The price of Sony VCT-SGR1 Shooting Grip is SAR 409 and it will be available in Saudi Arabia from 1st September.