Huami (NYSE: HMI) with its self-owned brand Amazfit, ranked No.1 by shipments in Spain, Indonesia and India, and No.2 in Italy, No. 3 in Russia. IDC’s data showed that in the fourth quarter of 2019 Huami shipments were top-ranked of watch market (excluding kids’ products) in the above markets which contributed Huami Amazfit’s leading and fast growing wearable brand in the international market. 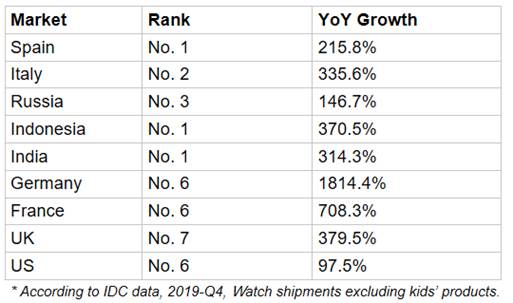 According to the 2019 financial report, Huami’s revenue in 2019 reached 834.9 million US dollars with 59.4% year-on-year growth and 42.3 million shipments in total.  Huami self-owned brand AMAZFIT overseas shipments has taken 51.6% of all with 70 more markets. In the Q4 of 2019, Huami entered MediaMarkt, the EU’s biggest consumer channel.

In the second half of 2019, Huami launched its sports series product, Amazfit Stratos 3, and the fashion product series, the Amazfit GTR and the Amazfit GTS. At IFA 2019, the high-end innovative concept product, the curved-screen Amazfit X were unveiled. The high growth rate of shipments has proved that Huami Amazfit products were well-recognized and welcomed by users.

In January, the Huami launched at CES 2020 the six new products spanning three verticals which indicates that Huami is enhancing its category and ecosystem expand, including the at-Home Gym, Amazfit HomeStudio; the foldable treadmill Amazfit AirRun; the true wireless stereo (TWS) fitness earphones with Clip-to-Go design, Amazfit PowerBuds; the sleep-comfort and health monitoring Amazfit ZenBuds and the outdoor series, Amazfit T-Rex. And all the new launched products have their names nominated as the "Best of CES" or recommended by global top media and institutions.


In the past, Huami shipped 11.6 million units of smart wearable devices in the first nine months of 2017, more than any other company in the world. It is the world’s largest producer of wearables in 2018 as well. As of August 2019, Huami has sold out more than 100 million smart devices in more than 70 markets. As a true active wearable industry player with good will, Huami aims to help more people live healthier and to establish a health ecosystem, and on its way to be the most trusted partner of its users.

With the increase of market share, Huami and Timex have cooperated closely in product development. At present, the first products jointly launched by the two parties have been put into the North American market. At the same time, the partnership with Xiaomi is continuing, and it is expected that the Mi Band 5 will be launched later this year.