Lenovo Group has announced robust results for its full fiscal year and Q4, demonstrating the company’s position of strength amid the unprecedented global transformation. Despite a fiscal year full of macro-economic and industry challenges, the company delivered full-year revenue exceeding US$50 billion (US$50.7 billion) for the second consecutive year. Profitability remained a strength, with historical high pre-tax income of US$1.02 billion, up almost 19% year-on-year. Full-year Net Income was US$665 million, up 12% year-on-year.

The last 12 months presented several industry-wide challenges, including geo-political uncertainties, component supply shortages, currency exchange impact, and in the fourth quarter the global COVID-19 pandemic. As relates to coronavirus, the business leveraged the power of 30+ in-house and third-party manufacturing sites around the world to adjust capacity and rebalance production. This geographical balance and innate flexibility and resilience was at the core of the operational excellence shown throughout the year, ensuring the company continued to manufacture products and deliver orders to customers throughout Q4. Looking ahead, this foundational capability, together with ongoing innovation, will continue to drive business as the company seizes the long-term growth opportunities that the ‘new normal’ of working and studying from home is creating. This trend is not only leading to a growth in PC and smart devices but also in the supporting data centers and infrastructure to power faster networks and digital consumption. 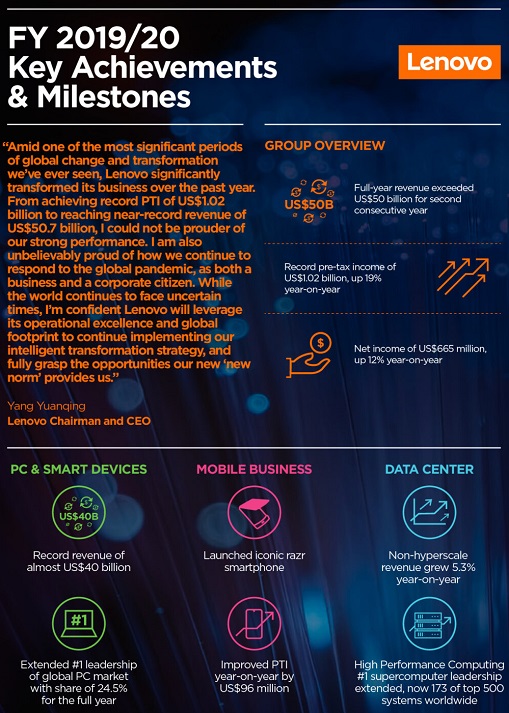 Lenovo’s Intelligent Devices Group (IDG) continues to lead the company’s strong performance. The PC and Smart Devices group (PCSD), one of the two IDG business units, led the way with revenue for the year of almost US$40 billion, up 3.6% year-on-year. Profitability improved, with pre-tax income a record high of US$2.3 billion (more than 18% year-on-year) and an industry-leading and record-high PTI margin of 5.9%, up 0.7 points year-on-year. The leadership of the overall global PC market was extended, with share up more than 1 percentage point at 24.5% for the full year. This strong sustainable growth is driven by a consistent strategy to focus on and invest in high-growth segments, with Gaming, Workstations, Visuals, Thin and Light and Chromebooks each outgrowing the market by double-digits in volume.

IDG’s second business group, the Mobile Business Group (MBG), was on target for a breakthrough year until the fourth quarter impact of the required closure of the company’s primary smartphone factory in Wuhan due to COVID-19. Overall MBG revenue declined and pre-tax loss was US$43 million, greatly narrowed by US$96 million year-on-year. The business continued its focus on innovation, reentering the premium segment with the iconic foldable Motorola razr smartphone.

The highlights of the Q4 for revenue of Lenovo are as follows;

• PC and Smart Devices delivered a strong quarter. Revenue was down 4.4% year-on-year, but pre-tax Income improved by 15% (US$525 million v US$458 million) year-on-year, extending the company’s industry leading profitability by 1 whole point to a record high of 6.2%.

• The Mobile Business Group was impacted by COVID-19 with the company’s primary global smartphone factory in Wuhan shut for much of the quarter. Despite this the business leveraged its global manufacturing footprint and produced 6 million phones during the quarter.

Yang Yuanqing, Lenovo Chairman and CEO, said; Amid one of the most significant periods of global change and transformation we have ever seen, Lenovo significantly transformed its business over the past year. From achieving record PTI of US$1.02 billion to reaching near record revenue of US$50.7 billion, I could not be prouder of our strong performance. I am also unbelievably proud of how we continue to respond to the global pandemic, as both a business and a corporate citizen. While the world continues to face uncertain times, I’m confident Lenovo will leverage its operational excellence and global footprint to continue implementing our intelligent transformation strategy and fully grasp the opportunities our ‘new norm’ provides us.