On average, more than 170 million Snapchatters engage with AR daily for nearly 30 times per day. Lenses, Snap’s AR product, are made by Snap’s own design team and its global creator community, with top-performing community Lenses reaching billions of views on Snapchat.

Lens Studio is a powerful, free desktop application designed for developers and artists to build and distribute AR Lenses on Snapchat. 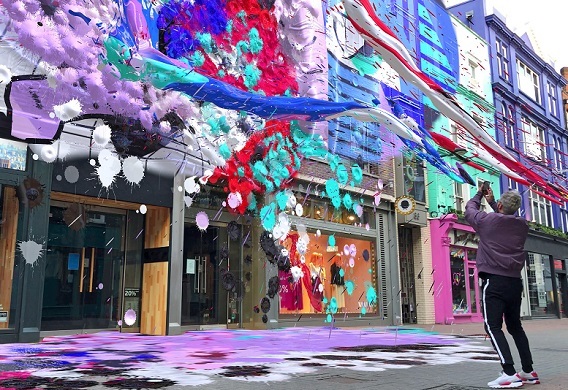 Today, Snap is updating Lens Studio with new advanced features to push the boundaries of AR creation. Lens Studio now features SnapML, which lets any developer bring their own machine learning models to power Lenses. Now, anyone can create their own Lenses with neural networks that they’ve trained, expanding the possibilities for Lenses that can transform the world. Snap has partnered with Wannaby, Prisma, CV2020, and several Official Lens Creators on their first SnapML creations.

Snap is also previewing Local Lenses, which enable a persistent, shared AR world built right on top of your neighborhood. Soon, Snapchatters and their friends can step into this virtual space together to decorate nearby buildings with colorful paint and experience a new dimension of AR.

When Snapchatters “press and hold” on the camera screen, relevant, helpful Lenses are unlocked based on what they see in front of them.

With PlantSnap, Snapchatters can identify 90% of all known plants and trees. In partnership with Dog Scanner, point the Snapchat camera to recognize almost 400 breeds. An integration with Yuka later this year powers Nutrition Scanner, which provides a rating on the quality of ingredients in many packaged foods by scanning an item’s label. Scan can also enable compelling experiences for brands. Soon, Scan the iconic Louis Vuitton monogram to be transported into the inspiration behind their latest collection.

Additionally, Snap is introducing Voice Scan, which offers Snapchatters Lens results based on voice commands. Powered by a partnership with SoundHound, press and hold on the camera screen to tell Snapchat what kind of Lens to display.