In recognition of its innovations in smart wearables, Amazfit ZenBuds won Red Dot in the Red Dot Design Award 2020 . It has been also honored by media as one of the best with its special and innovative product design. The Amazfit ZenBuds is to disrupt the smart wearable and health industry by setting the bar since its debut in Las Vegas.

Nowadays, more and more people suffer from sleep problems. Designed for health seekers, Amazfit ZenBuds are the calming partner for the office, bedroom and for when you need some ‘me time’ away from the world. Amazfit ZenBuds innovate the audio experience with a noise-blocking in-ear design which fits snugly into ears with an ergonomic, sleep-assisting design that insulates you from outside noises, giving a peaceful night’s rest, or helping to relax and concentrate during day time. 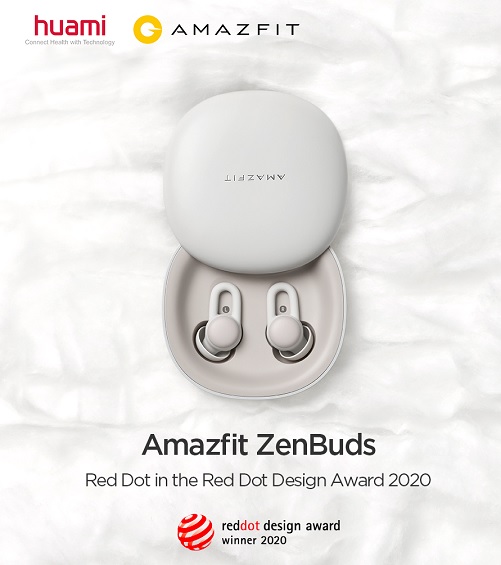 As a sleep and relaxing aid, Amazfit ZenBuds is equipped with Knowles Balanced Armature which guarantees the advanced quality acoustics. The Amazfit ZenBuds use a wide library of natural, sleep-inducing sounds to create soothing white noise that helps cancel out distracting sounds. From bubbling brooks to serene forests, curated sounds trigger the sleep cycle and make sure easy sleep. After the Smart playback is turned on, the soothing sounds can automatically pause playing once you fall asleep.

Amazfit ZenBuds is designed to monitor sleep, which can record your sleep positions, heart rate and the quality of sleep. You’ll wake up each morning and get insights that can help you create better habits. Also coming with a breathing exercise, Amazfit ZenBuds is developed to help you relax and calm your mind after a busy day.

The ultra-lightweight Amazfit ZenBuds only weigh 1.78g per side, and they have been extensively tested for secure fit without feelings of swelling. Each earpiece is ﬁrmly braced against outer ear, preventing them from slipping out as you move. The skin-friendly silicone ear tips contribute to an elastic and stretchable texture. So Amazﬁt ZenBuds won’t cause pressure and discomfort in ears over the night. Coming with four sizes of ear tips, Amazﬁt ZenBuds make sure the right fit for different ears, where there's no probing effect in your ear canal and no worries about sticking in too deeply or falling out.

A fully charged pair of Amazfit ZenBuds can last for 12 hours when you preset the playback duration, which means you can choose how long the ZenBuds will play for – whether it’s 30 minutes, one hour, or five. Set your preference, and let the Amazfit ZenBuds carry you into a night of deep rest timed just the way you like it. Or if you prefer to have serenade all night, you can switch to Unlimited duration for a full 8 hours of sleep-inducing sounds. With the charging case, you can get an additional 56 hours, allowing up to 8 nights of use on one charge. That’s the recommended target for a good night’s sleep. So you can wake up well-rested and in the zone.

Amazfit ZenBuds don’t just focus on helping you achieve the perfect night’s sleep – they wake you gently with a personal alarm that increases gradually and doesn’t disturb anyone around you. For blocking out distracting noises, Amazfit ZenBuds are your ideal partner in productivity. The ZenBuds help you to organize your time better and with the Pomodoro Timer (PT), allowing to stay focused for 25 minute stretches. Take a short break, and they will help you get right back in the zone by blocking out sound and playing the right sounds to keep you on track. Amazfit ZenBuds will also make sure you won’t miss an incoming call in the midst of your “zen-zone”.

Amazfit ZenBuds will be available on 30th June on Indiegogo: https://rb.gy/jjijnx . The crowdfunding price starting at USD$69 with a 53% discount (daily retail price: USD$149). While the single package looks attractive, Amazfit has also brought a sales combo with an eye mask, which is sold together with the earbuds to further enhance users’ sleep quality.