1MORE, a globally distributed premium consumer audio company, today announced they have received three 2021 CES Innovation Honoree Awards, marking 12 such awards in just the last fours years. 1MORE is the most awarded headphone brand by the CTA over that same time.
Taking home awards this year are the 1MORE ComfoBuds Pro ($99), ColorBuds ($99), and ColorBuds Pro (A.K.A., ANC True Wireless Pro $149) in-ear headphones. Announced along with the award winning headphones are the ComfoBuds ($59) and the smartwatch plus true wireless headphone combo, the SoundDuo ($199). The new collection of true wireless headphones and smartwatch will be available later in Q1 while the ComfoBuds and ColorBuds are available now on Amazon and 1MORE’s direct website, the ComfoBuds have a special launch discount of $10 off for a limited time.
1MORE has now expanded its true wireless family to include nine new headphones, all released in just the last year and a half. Since 2015 1MORE has been climbing the ranks in the premium consumer audio market with award-winning designs packed with 1MORE’s signature sound and solid build quality at extraordinary pricing. This year’s awards from the CTA confirms 1MORE among the top of the true wireless category as far as choices for consumers, with true wireless headphones ranging in price from $49 to $199. 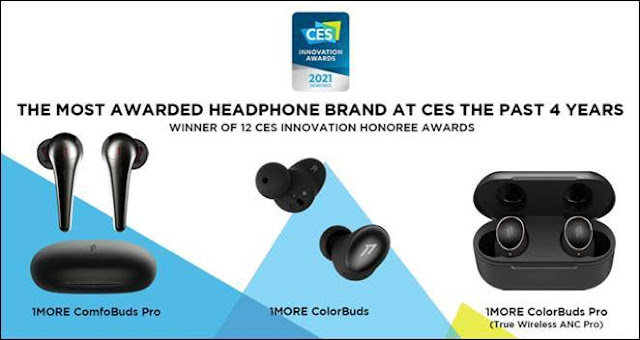 The ComfoBuds and ComfoBuds Pro are 1MORE’s answer to the Apple AirPods and are positioned to be “Airpod Killers,” defeating the Airpods series on multiple factors, including, price, sound quality, comfort, and 1MORE’s QuietMax ANC technology.
The ComfoBuds and ColorBuds are 1MORE’s 4th and 5th true wireless product to hit the market this year and represent 1MORE’s effort to bring comfortability, and portability to the true wireless category, while still delivering the 1MORE signature sound that 1MORE is known for.
The two headphones come packed with top of the line features like 4 ENC microphones for crystal clear calls, instant paring for hassle-free use, Bluetooth 5.0 for extended range and sound/call quality, auto pause/play touch controls, IPX5 water and sweat resistance and 1MORE in-house sound tuning. The 1MORE ColorBuds and ComfoBuds are the perfect combination of amazing value, technology and user friendliness whose vivid color options and sleek aesthetic make them as much a fashion statement as an audio accessory.

The ComfoBuds Pro will provide users with a second option for that series that will include features such as 1MORE’s QuietMax ANC technology, and 4 ENC mics backed by an AI powered deep neural network for crystal clear calls.  The ColorBuds Pro (A.K.A., ANC True Wireless Pro) will also feature the same ENC mic technology but will also boast upgraded Bluetooth 5.2 multipoint connectivity allowing users to connect seamlessly to multiple devices.
Users can now watch a movie with a friend on their laptop, then receive and take a call on their phone - then switch back to their movie without ever having to re-pair their headphones. Rounding out 1MORE’s CES product launches is the innovative SoundDuo, which is part smartwatch and fitness tracker and part compact true wireless headphones in an all-in-one package. Simply pop open the watch, slide out the earbuds and now you have the perfect duo for your on-the-go adventures.