Riot Games MENA has unveiled a first-of-its-kind Arabic music video and track for gamers across the Middle East and North African (MENA) region, uniting its VALORANT fanbase under a common language, love of music and passion for gaming.
The VALORANT Music Beat ‘Anta Al Batal’ (You Are The Champion), produced and conceptualized by RIOT Games MENA and Sony Music Entertainment Middle East, brings together some of the Arab world’s biggest and emerging music stars; Moroccan rap sensation, Issam Harris; Egypt’s Trap Legend, Marwan Moussa; and female vocalist, Fafa, a rising star from the UAE and regional music scene. 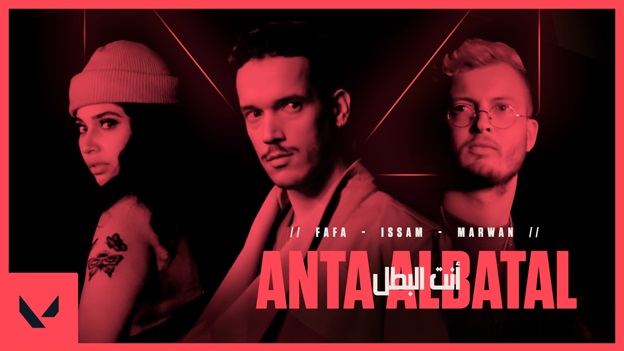 Celebrating the passion of MENA gamers for VALORANT, which has quickly established itself as a fan-favorite in the first-person shooter community, Anta Al Batal is the latest milestone in Riot Games’ growing commitment to its Arab-speaking fanbase and follows the launch of the Bahraini servers, localization of VALORANT into Arabic and Strike Arabia.
Riot Games worked in partnership with Sony Music Entertainment Middle East to conceptualize the unique audio and video style of Anta Al Batal, that merged languages, melodies and cultural themes from Egypt, Morocco, UAE and beyond. The project took inspiration from the many cultural banners that exist across MENA, to unite gamers under their common passion for VALORANT and music.
Anta Al Batal serves as an anthem for MENA teams vying for the ultimate prize at VALORANT’s professional and semi-pro tournaments. Teams across MENA are gearing up for the second season of the Strike Arabia Championship in June and July for a spot in the Grand Finals. Winners of the regional tournament will earn the right to take part in VALORANT Last Chance Qualifier in Europe and potentially the global showdown that pits the world’s best teams and players against each other.
The vision behind Anta Al Batal was to create a celebratory moment in the region's history of gaming, give VALORANT players a soundtrack that is truly theirs, and mark another significant milestone of Riot Games’ commitment to Arabic gamers.
Anas al Hakim, Content Manager at Riot Games MENA, who masterminded creative direction of the music video, said:

Prior to online multiplayer games, music was the number one thing that transcended the MENA region. Now, with music and gaming we have a winning combination to unite our p

layers through unique experiences that they can all enjoy. Our hope is that the bridges we build are not only between us but also with players from all around the world.
Mike Fairburn, General Manager at Sony Music Entertainment Middle East commented;

Music is a global connector – it binds us all and reflects the varied cultural narratives of our region. Our company culture is built around this positive force and with the Riot Games team, we found a perfect partnership focused on collaboration, as well as an openness to use music and gaming to make deep connections. We are incredibly excited and proud to share our collective creative efforts with the world