Dynabook Europe GmbH reveals the results of its new research report, ‘The Hybrid Shift: Managing an increasingly remote workforce’,  which shows that 65% of European IT decision makers have access to increased IT budgets this year both to accommodate more widespread remote and hybrid working, as well as to support business continuity.

The research, commissioned by Dynabook in partnership with Walnut Unlimited, surveyed more than 1,000 senior IT decision makers at medium to large enterprises across a range of industry sectors within the UK, France, Germany, Spain and the Netherlands to reveal IT spending, new working patterns and device priorities for the next 12 months.

While all regions surveyed indicated an increase in IT spend, Spain noted the most change, with 71% of organisations demonstrating a rise in technology investments in the next year, closely followed by 70% of businesses in the Netherlands. Over three quarters (76%) of financial services organisations revealed increased budgets, while 73% of manufacturing businesses said the same. Enterprises operating in the retail sector were the least likely to up IT budgets, although over half (54%) still indicated increased IT expenditure. 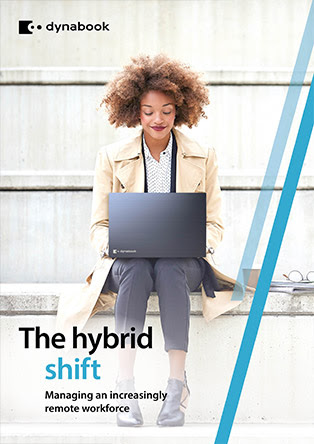 Changing work patterns and locations are a clear driver for this growth in IT spend. The study found that over two thirds (67%) of employees are expected to either work from home or from no fixed location following the pandemic, which has increased from 53% before COVID-19.

When asked about ensuring the productivity of their growing remote workforce, over half (51%) of organisations surveyed indicated they will prioritise providing remote support/assistance for staff. When compared to similar research conducted by Dynabook in 2018, this has increased from 29%. Secure communication and collaboration tools were also regarded as important for employee productivity – 41% of IT decision makers noted both as key for supporting good employee performance, while 37% indicated IT training as an important factor here.

The research also found that European businesses are continuing to accelerate digital transformation and equip themselves with a robust IT infrastructure to support a new remote and hybrid workforce. Cloud solutions and remote IT assistance were highlighted as top priorities for organisations across all markets and sectors, as 50% of respondents ranked both technologies top respectively. UK businesses were found to be prioritising remote IT support the most, with nearly two thirds (63%) naming this as a key focus.

Cybersecurity infrastructure (48%) is also expected to be a key technology investment priority in the next year, followed by IT training for staff (40%) and equipping employees with devices coming in fifth (37%). When comparing the importance placed on these technologies to pre-pandemic times, 77% of organisations now regarded security software as more important, while 73% said collaboration tools are now more significant. At the same time, 70% indicated cloud platforms as more valuable, and 62% regard device accessories with heightened importance going into the new normal.

The research also highlighted an increased value placed on laptops – the unsung heroes of the pandemic – as nearly three quarters (74%) of businesses now regard purchasing decisions around such devices as more important than before COVID-19. The UK saw the highest disparity between laptops and desktops usage, with 90% of UK companies using laptops and only a third (33%) using desktops for remote working. Desktops popularity remains higher in other parts of Europe – Spain (52%), France (47%), Netherlands (46%).

What’s more, two thirds (66%) of organisations are now planning to integrate more laptops into their remote working infrastructure over the next 12 months, demonstrating that the reliance on notebooks will remain strong for the rest of 2021.

When it comes to key device features, European businesses appear to be taking heed of warnings of increased cyber-attacks, with 81% of businesses considering security to be an important feature when purchasing a laptop. Other key priority features include connectivity (80%), performance (76%), battery life (72%) and portability (70%). That said, 28% consider performance to be the most important feature, compared to 20% for security.