Razer has announced the next stop for its global esports series with the Razer Invitational – Middle East. Following the global success of Razer Invitational Season 2020, the tournament series is now making its debut in the Middle East. Welcoming competitors from across the region and of all abilities, players can compete in four separate week-long tournaments pitting their skills against the best the region has to offer. Happening for the very first time in the Middle East, this will be the largest MENA-based open tournament of its kind.
The Razer Invitational – Middle East will kick off on August 8th with what promises to be four days of hotly contested Call of Duty: Black Ops Cold War tournament play, followed by some intense VALORANT action from August 15th to 19th. The focus then shifts to mobile play between August 22nd to 26th with PUBG Mobile before the event closes out with some classic MOBA action in League of Legends from August 29th to September 2nd. 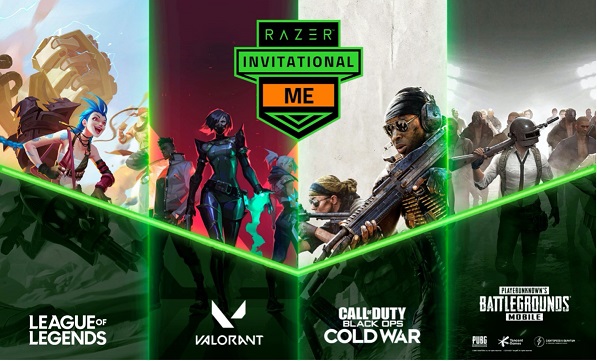 Gamers from all over the MENA region can sign up and compete to proudly represent their squad, team, and nation in an entirely online, virtual event to not only make a name for themselves but to also potentially kickstart their own professional esports career. With a total prize pool value of over USD $50,000, the top three teams in each tournament stand to win significant cash prizes. There are also various Razer hardware prizes up for grabs for winners of the side competitions, and cash prizes are awarded to tournament MVPs voted for by the viewers.
In the spirit of inclusion, prizes aren’t just for players.  Viewers voting on each tournament’s MVPs will be entered into a draw to win a suite of Razer peripherals. Razer will also be running a grand draw for awesome Razer prizes across the duration of the event, as well as a weekly quiz prize on its social media channels.
Viewers, fans, and players can tune in to Razer’s YouTube, Facebook and Twitch channels to watch the live matches, broadcast in Arabic. Twitter and Instagram users should follow the hashtag #ThisIsEsports for the latest updates. Popular MENA YouTubers, GAMER SNACK and oPiiLz, will also be following the Razer Invitational – Middle East on their social media channels, so fans can keep up with the action there too.
Registration for the Razer Invitational – Middle East is now open and is completely free. Players are encouraged to sign up as soon as possible, especially for PUBG Mobile as it is one of the MENA region’s most popular games.
For more information on the Razer Invitational – Middle East, registration information and schedules for the qualifiers, channels to follow and where to watch the tournaments, please visit the Razer Invitational – Middle East Website at razerinvitational.com/me or Team Razer’s Facebook page.
Yann Salsedo, Head of Esports for Razer EMEA, said;

The Razer Invitational series is an inclusive space that gives all gamers the opportunity to take part in a large-scale online tournament and to experience the thrill of competitive play. Bringing the Razer Invitational series to the Middle East is a big step in cultivating the next generation of esports talent from the region. Featuring multiple titles allows more players, at every skill level, to compete and have their shot at glory.