I was trying my hands on it for the last few weeks and now it is time to share my detailed review of the device with you all on Geeky Stuffs. This review is divided into different sections, covering the pros and cons of each of them to give you a better idea. 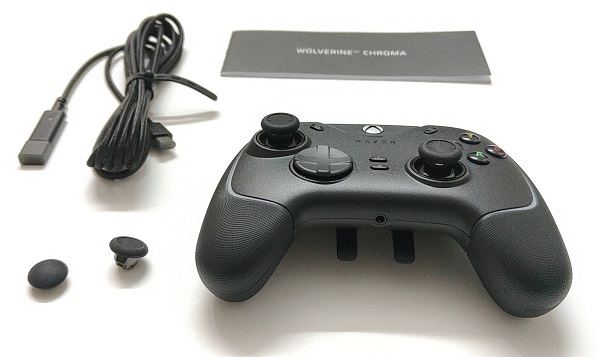 Just like all other Razer products, the Razer Wolverine V2 Chroma also comes in an eco-friendly box and packaging.

On the front, there is LED indicator provided along with the usual Xbox button. There are View and Menu buttons like a regular controller. And then we got the Share button, and an Audio Configuration button as well.On the back, there is USB Type-C port for connectivity purposes. 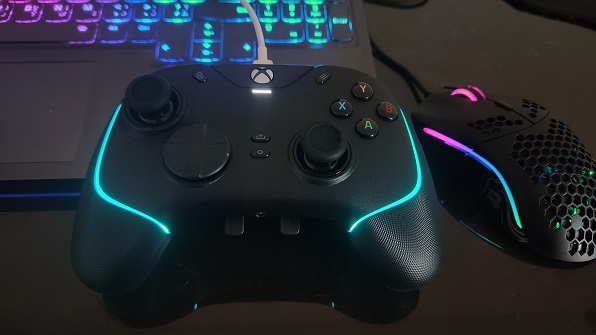 There are also 2-stage trigger stop-switches provided on the back of the controller to adjust the pull distance of the RT and LT triggers simply by sliding them outwards and inwards based on the type of games you are playing.

There are two RGB light strips on both left and right sides giving the device a very unique and gaming accessory appearance. These RGB lights are configurable and you can assign many different lighting patterns to them.

The matte-finished body and textured sides where you hold the controller provide a very nice and comfortable grip that allows you to play games for hours with Razer Wolverine V2 Chroma Xbox gaming controller without facing any discomfort.

There are total 6 additional buttons that are also remappable - 2 additional bumpers at the top and 4 triggers at the back. All of these 6 buttons can be remapped to other buttons using the Razer Controller Setup for Xbox software to perform various actions like crouch, slide, switch weapons, reload, jump etc. without taking your thumbs off the thumbsticks. This is a big advantage over controllers that don’t have this feature and it improves the gaming experience a lot especially in FPS games in which gamers need to perform multiple actions quickly.

As we have seen during unboxing, Wolverine V2 Chroma comes with two extra thumbstick caps. The thumbsticks connect with the controller magnetically. So you can easily remove them and swap with another one quickly to improve the gaming performance. For example, the tall and concave thumbstick is useful for snipers as it provides better accuracy with more range of motion while aiming. The short and domed thumbstick is better for fast FPS games as it gives you more speed because of short size.

Overall the Wolverine V2 Chroma is designed for pro-level gaming and so provides lots of additional features to improve the gaming performance and compete with the keyboard-mouse gamers.

This is kind of annoying especially if you already got other Razer products and use Razer Synapse for them. But for some reason, Razer still wants us to use the Razer Controller Setup app for its gaming controllers. You can even set a “clutch” button that will instantly change the sensitivity of the thumbsticks, allowing faster/slower control in-game depending on your requirement in the gameplay.

Razer Controller Setup for Xbox app is feature-rich and provides lots of options that you can use to improve the user experience and gaming performance as well while using the Wolverine V2 Chroma. The app is available for download on the Microsoft Store on both Xbox and PC.

The overall design and build quality are very nice and the performance is just top tier. So if you are planning to buy a new gaming controller for Xbox or PC, Razer Wolverine V2 Chroma is among the best options for you.