Razer today announced a multi-year, wide-ranging sponsorship that will see popular esports and entertainment group Envy Gaming name Razer as its Official Peripherals Partner and provider of headsets, keyboards, mice, mouse mats, and gaming chairs to the organization’s talent, creators, and professional esports teams. This overarching partnership will result in collaboration across multiple teams and properties under the Envy and OpTic Gaming banner including: OpTic Texas in the Call of Duty League, OpTic Halo, OpTic Valorant, Envy Rocket League, the Dallas Fuel in the Overwatch League, as well as integration with the organization’s diverse roster of content creators.

Razer is being integrated across all aspects of the organization including Razer branding and logos on OpTic and Envy team jersey sleeves for OpTic Texas, OpTic Halo, OpTic Valorant, and Envy Rocket League. Future activations will extend across digital and physical properties, and include potential further Razer content integrations, sponsorship of creator-led streams including OpTic Warzone tournaments, exclusive product drops, creator appearances at RazerStore locations, and more.

Razer will also activate at numerous live esports events hosted in North Texas beginning when OpTic Texas hosts the first Call of Duty League major LAN tournament of the season on March 3-6 at Esports Stadium Arlington. Thousands of fans are expected to attend the four-day event, with more than 75% of initial ticket sales coming from Call of Duty League faithful traveling from out-of-market. 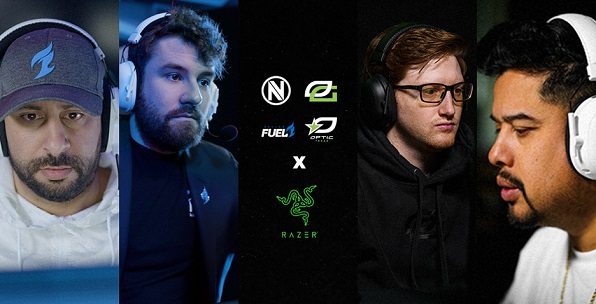 In conjunction with the incredible in-person fan experiences that are being curated, virtual Call of Duty players will also be getting a piece of Razer’s exclusive partnership: Razer will be the sole brand featured on the Call of Duty League in-game operator skin for OpTic Texas shown during match broadcasts.

By integrating continuous feedback sessions with pro players and the community during the design process, Razer’s cutting-edge esports peripherals are engineered to meet players’ every need even in the most strenuous situations. As part of this partnership, Razer will be enlisting Envy and OpTic pro players and creators in crucial R&D feedback for the next generation of gaming and esports peripherals.

Team Razer’s driving ambitions have always been around cultivating passionate communities within esports, and turning those passions into championships. We have an ownness to ourselves and to the community to constantly push the envelope, and to carry esports into its next era. Together with Envy and OpTic we’re expanding to tens of millions of new fans and bringing Razer back into the forefront of North American esports where we belong.

Bringing together innovators and industry leaders is core to what we believe will propel esports and gaming further into mainstream culture and entertainment. Adding a global leader of Razer’s caliber across all Envy and OpTic teams and creators gives great payoff to the culture and audience cultivation we’re building today and for the future.