There is Tremendous Gaming Talent in the MENA Region : Nitesh Kriplani, Hackwood Games


Calyx, a subsidiary of Hockwood Games, has very recently successfully concluded the finals of the inaugural VALORANT MENA League tournament in Riyadh, in partnership with Saudi Esports Federation and Riot Games, with a total prize pool of $80,000 (SAR 337,850).

We got the opportunity to have a quick session with Mr. Nitesh Kriplani, CEO and Managing Director of Hackwood Games, and below is the synopsis of the conversation.

1. Can you tell me about your past experience in technology and why did you go for Hockwood Games?

I’ve previously worked with Amazon and Sony Pictures, and several tech/gaming start-ups in India; British Telecom in London; and AT Kearney in Singapore. I’ve been fortunate enough to have worked both in large corporates and small startups, but always focused on building businesses from scratch in the media, entertainment, and gaming industry. I have dual degree in business and software engineering and hold an MBA from INSEAD France.

I was a member of the India leadership team at both Amazon and Sony Pictures Entertainment and led the conceptualization, strategy, product/tech, operations, team building, growth/scaling, and P&L for two market leading mobile-first video streaming services – Amazon Prime Video and Sony LIV as Country leader between 2009 and 2017. I have been working closely for the past 4 years with start-ups and venture capital firms helping them build and scale up businesses in short-video, creator/influence economy, content-based commerce, mobile gaming & esports, and digital media/entertainment

Hockwood Games is super interesting to me because esports in the region is growing exponentially; the team has done a fantastic job thus far in terms of business, gamers’ experience, and business partnerships, and finally, the culture of the team/company is great. 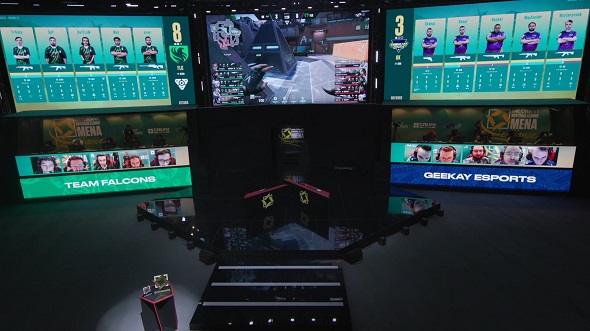 2. How do you think local talent can be leveraged more in the region?

There is tremendous local talent in the region and thus far, it has not been given the attention and support that they deserve. We are starting to see some green shoots of support and growth for them via regional teams and of course, via the tournaments being organized. But we need to do more as a community. We are bridging this gap by enabling – 1. Pro gamers to compete in the international leagues from the MENA region; and 2. Amateur gamers to compete in the pro tournaments via the Intel Arabian Cup Playground. The winning team of the VRL MENA finals – Team Falcons will now represent the MENA region in the VRL EMEA Finals, where they will get the chance to compete against the other winners of every VRL in EMEA and battle out for a prize pool of Euros 150,000 (over SAR 568,475).

3. With this KSA VRL Finals, are there any other major events that Hockwood Games will be hosting in the future in the GCC?

Yes, we are in active discussions with global game publishers and, we will be building our own world-class tournaments; please stay tuned.

4. With the current rapid increase for interest in esports in the region, how long do you think it would need to be adopted over TV channels?

We’ve pioneered the broadcasted esports tournaments’ gameplay and content already on linear TV, on MBC Action for both Call of Duty and PUBG in March and April respectively. We had a record viewership of 813K unique TV viewers. While these results are very heartening, to make it mainstream, we will need to first raise the awareness of gaming with the masses; we will need to make heroes out of players so they can be recognized and help build their fandom; we will need to make the gameplay more engaging and more entertaining to grow the total potential viewership – this is our objective as Hockwood Games. Only then will we see a larger and more widespread adoption on linear TV channels across the region.