HONOR has reaffirmed its commitment to international markets during its IFA 2022 keynote presentation, titled "Embracing the Connected Future." During the event, the brand announced a new Dual Flagship Strategy to bring the next foldable and all-round flagship smartphones to Europe and other international markets. The brand also previewed MagicOS 7.0, an upcoming all-scenario smart collaboration OS based on Android as well as PC and IoT operating systems, embracing open standards to facilitate seamless collaboration among smartphones, tablets, PC and other IoT products. Bolstering its innovative product portfolio, HONOR introduced three new products: HONOR 70, HONOR MagicBook 14 and HONOR Pad 8, the first HONOR tablet available outside of China. All three products are set to arrive in select European markets in the coming weeks.

Bringing HONOR Talents to the global stage, HONOR also unveiled Gateway to the Future, a global initiative piloting in Hamburg, Germany with the aim of inspiring creative talent from all around the world to use the power of technology to connect people with culture in the era of the metaverse. 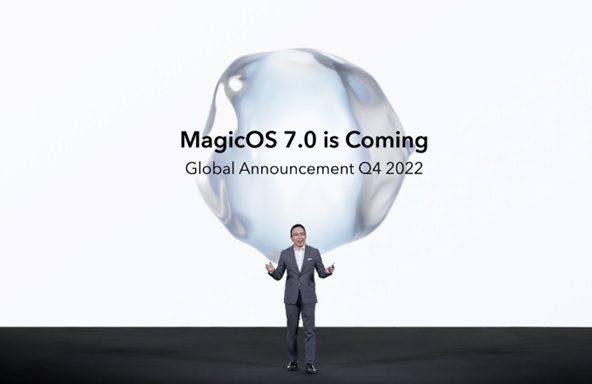 HONOR also unveiled MagicOS 7.0, a new OS designed to provide seamless experience across the cross-platform, cross-device experiences. It is based on Android as well as PC and IoT operating systems, so devices running different OS can connect to MagicOS devices at a system level. Alongside new user interface changes, MagicOS 7.0 will let users control an HONOR laptop, smartphone and tablet using a single keyboard and mouse. Through the feature, users can drag files across devices seamlessly, as well as type text into the smartphone or tablet with their laptop keyboard. MagicOS 7.0 will be officially announced in Q4 2022.

HONOR announced that the brand has joined various IoT consortiums including Matter and Ola, helping to formulate common industry standards that promote open collaboration. In addition, the new HONOR Developer Service Platform will provide direct support and services to developers. Among the many services available, developers can submit their apps into App Market and Game Center through the platform. It will also provide developers with access to various system capabilities for them to develop cross-device features for HONOR device users in the future. Interested developers may visit the following site for more information: https://developer.hihonor.com.

HONOR is expanding its partnership with Microsoft to bring Phone Link to international HONOR device users. Previously only available to HONOR device users in China, Phone Link lets users connect select HONOR smartphones to Windows PCs to unlock new cross-device capabilities, including the ability to view notifications, make and receive calls on their PC and use mobile apps on Windows. The HONOR Magic4 Pro is among the first international HONOR smartphone models to support Phone Link, while the HONOR 70 will also support Phone Link following an OTA update.

Designed for vlogging enthusiasts, the HONOR 70 is HONOR's latest addition to its high-end N Series smartphone line up. The stylish device debuts with Solo Cut mode, which lets users easily produce vlogs that spotlight a specific person in a group through built-in Person Re-identification Technology. With Dual Video Streaming, HONOR 70 can record two videos simultaneously, with one featuring a single subject and the other capturing the full group.

Capturing high quality vlogs is easy with the HONOR 70, thanks to its powerful Dual Main Camera that comprises a 54MP IMX800 Super Sensing Main Camera with a large 1/1.49-inch IMX800 Sensor and a 50MP Ultra-Wide & Macro camera. The new smartphone is powered by Qualcomm Snapdragon 778G Plus 5G and supports GPU Turbo X and OS Turbo X, delivering smooth performance and a responsive experience across a range of heavy-duty tasks, including video editing for vloggers who are always on the move. 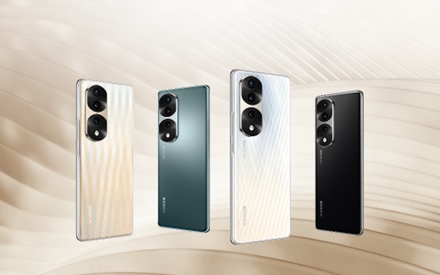 The HONOR 70 is the first HONOR N Series smartphone to run HONOR Magic UI 6.1 based on Android 12 and is available in a range of fashionable color options including Midnight Black, Crystal Silver and Emerald Green.

In recognition of HONOR 70's excellent user experience, the Expert Imaging and Sound Association (EISA) awarded the smartphone the EISA BEST BUY SMARTPHONE 2022-2023 award. EISA is an expert community comprising over 60 of the world's most respected consumer electronics magazines, websites and social media commentators from 29 countries.

The HONOR 70 will be available in select European markets from today for a starting price of EUR 549.

Featuring OS Turbo for the first time ever on an HONOR laptop, the all-new HONOR MagicBook 14 delivers significant upgrades in battery life and up to 20.8% better power efficiency compared to its predecessor. The laptop is powered by a 12th Gen Intel® Core™ i5-12500H processor and is configurable with a NVIDIA® GeForce RTX™ 2050 dedicated graphics card, offering blazing fast performance whether working in the office or gaming at home. With a 75Wh battery, the HONOR MagicBook 14 provides up to 17 hours of battery life on standby, and supports fast charging to provide up to 3.5 hours of uptime when running productivity software after just 15 minutes of charging. Coming in a sleek yet elegant Space Gray colorway, the HONOR MagicBook 14 is slated to arrive in select European markets with pre-orders starting today, with a starting price of EUR 1099.

The HONOR Pad 8 is an affordable all-round smart device catering to the productivity and entertainments needs of students and young professionals. The new HONOR tablet combines a 12-inch 2K HONOR FullView display featuring a screen-to-body ratio of 87% and support a resolution of 2000x1200 pixels and 1 billion colors with eight built-in loudspeakers to deliver immersive multimedia experiences on the go. Running HONOR Magic UI 6.1 with Google Play Services, the HONOR Pad 8 packs a high capacity 7250 mAh battery for all-day connectivity, allowing users to stay connected at all times. Arriving in select European markets with pre-orders starting today, the HONOR Pad 8 comes in Blue Hour and will retail at a starting price of EUR 329.

Gateway to the Future

Unveiled during HONOR's IFA keynote session, Gateway to the Future is a new HONOR Talents initiative designed to enrich cultural heritage through the power of technology. In collaboration with ARLOOPA, HONOR challenged two renowned artists – Yunuene and Timo Helgert – to creatively reimagine the iconic Wasserschloss building located in Hamburg's Speicherstadt, a UNESCO World Heritage Site. The AR experience is now live on-location in Speicherstadt, and is also available for users to view at home via the ARLOOPA app, offering smartphone users a new way to discover cultural treasures through immersive AR.

At its core, HONOR's Spatial Audio is designed to deliver surround sound and 3D audio through headphones by using the accelerometer and gyroscopes in earbuds to track the motion of the user's head, remapping the sound field to bring users an immersive and delightful audio experience in all scenarios such as movies, music and games. And by means of the algorithm, the changes of sound on its way from the source to the listener's ear can be simulated. These effects include localization of sound sources above, below, behind and in the front of the listener.

HONOR's Spatial Audio is the first to support sound externalization distance adjustment, providing users to dynamically adjust the distance of virtual sound sources from 0.15 to 10 meters to suit a more personalized listening experience.

Complementing the initiative, HONOR has introduced a dedicated Interactive AR Artwork category as part of its HONOR Talents global design competition. Within the category, contestants are invited to produce digital AR artworks which creatively transform their neighborhoods, including digital overlays for buildings, walls, parks, and other public spaces, helping to get communities closer to culture. Artists interested in the contest can find more information here: https://www.hihonor.com/honor-talents/en/

HONOR also partnered with the Central Academy of Fine Arts (CAFA) in China to create a new AR artwork titled INFINITY. The phy-gital experience showcases an artistic interpretation of the universe, which the creative team comprising CAFA faculty members and students use as an analogy to promote intercultural dialogue. The art is available at HONOR's IFA booth through the ARLOOPA app