Well after getting lots of invitation for blogger's social gatherings, this time I managed to join the Samsung Bloggers' Meet (Thanks to my buddy Asif who encouraged me to go out in scorching heat of Delhi). The venue for Samsng Bloggers' Meet was Hard Rock Cafe, Saket. It was one of the motivational fact to join the event as i really like Hard Rock Cafes :)....
(Click on the pics to enlarge them) 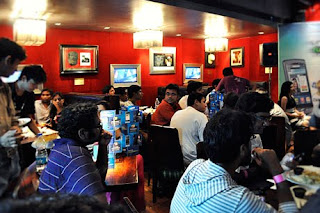 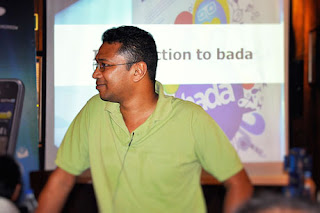 Even thogh we were late for 45 minutes, we were among the early arrivals. But soon, the venue was full of bloggers and the event started. Samsung Bloggers' Meet was being managed by Media Redefined. Sarfaraz of Samsung Mobile started the event with the introduction of the BADA which is the OS, created by Samsung itself, for the Samsung Wave phone. He also introduced the two members from the tech team of Samsung who came to join us from Banglore.

Sarfaraz checked the Gyan of bloggers by asking few questions about Smart Phones and mentoned that Samsung is planning to sell 10 millions Smart Phones in this year and twice of it in 2011. 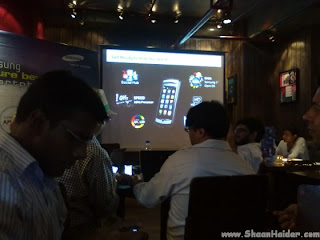 After the brief introduction to BADA and Samsung Wave , there was a small question and answer session which was kinda interactive. Then there was the time for free snacks and drinks and I want to say that I always love the snacks of Hard Rock Cafes :) 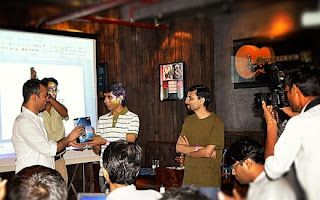 After this, there was the Samsung Galaxy S. This phone is having hell lot of features and it was the highlight of the event. I am not going to give you details the official specifications of this handset as you can get that from any gadget site. I am gonna talk about what I liked and disliked in this phone. Samsung GalaxyS is having a 1GHz processor which can give you a great and faster experience of HD videos, gaming and the internet.

The SOCIAL HUB feature was not much impressive for me as I am doing all these internet activities and having social networking widgets on my cheap touch screen phone,too. But what impressed me so much that this phone is having the facility to sync your phonebook entry with social networking profiles of your friends. So, you can get their updates right into your phonebook itself. Only problem is that it only supports 3 social networking sites Twitter, Facebook and MySpace. 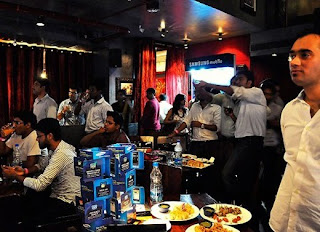 Another impressive feature was Write & Go. In this, you can send a single text as SMS, Email and status updates to your social networking profiles. You do not need to update them manually one by one. 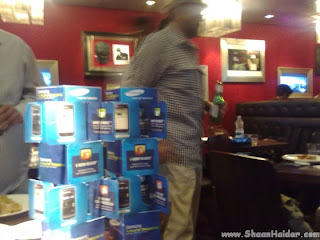 Samsung Galaxy S is having a Super AMOLED Screen which gives you a great viewing experience which you can feel only by using it. Unfortunately we were not able to get the demo of AUGMENTED LAYER REALITY BROWSER as signals were weak at the venue, but it was sounding pretty impressive.

Even though I am really good in typing on touch screen phones, the feature of Swype writing was a nice idea. Only problem is that you really, really need lots of practice for that as even Sarfaraz was not able to write with the help of it perfectly while giving the demo. 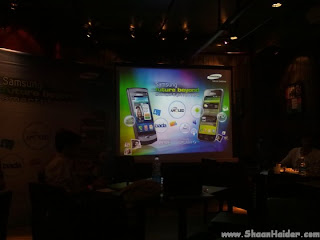 After that, there was the snacks time and a contest again and the winner got a Samsung Galaxy S. Met lots of nice bloggers there like Annkur, Rohit, Sachin, Prashant, Vivek etc. The last three were with me and Asif on the same table.

It was a nice experience at Samsung Bloggers' Meet to meet lots of people and the two high-end phones from Samsung Mobile. I hope that Samsung Galaxy S is gonna rule the Android phone's market :)

Thanks to Naina for sharing the pics of the event... You can see more pics of Samsung Bloggers' Meet on her site Studio Aside.