Twitter is a great social networking site. But one of the restriction there is that a single tweet can't be of more than 140 characters. But sometimes, we really need to say more than that without splitting the content in more than one tweet. 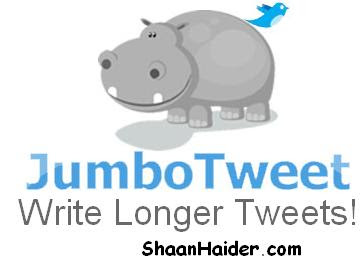 Twuit helps you to send tweets on Twitter with more than 140 characters. And the best thing is that there is no text limit. The long message will be divided into two or more short tweets. Besides, it also makes a translation for Twitter in any other language before sending.

Get tweeted with more than 140 characters along with make money online with twitter options on Tiny Paste. Just sign up and add your PayPal account and start sending tweets using their applications and make money of $0.005 for every unique click gets on your link

Now, just cut down the size of your Twitter tweet by using common abbreviations in the sms manner, Such as to use “ur” for your”, “u” for “you”, “c” for “see”, and so on.

Using Twit Wall, you can embed your favorite videos and widgets, upload your photos, mp3 music or podcasts and all in the tweet. Just the kind of stuff which helps to keep your followers following

Just another tool for tweeting longer than 140 characters

Just write and save text on Txt B, and then you will get a shortened URL which you can share with your Twitter friends to read the full text. And the best thing is that no registration is required.

Tweet Compressor makes your tweets shorter by replacing groups of two or three letters with a single character that looks the same just as you do while typing a sms in your mobile.

Twittlot is a service that lets you communicate against the 140 character specification, it allows you to send out tweets of more than 140 characters easily. To make use of this app, all you need to do is sign into the app as you would do whenever you want to tweet about something, and then go ahead and proceed to write the “expanded” tweet. Once you are done with the above procedure all your need to do now is simply send out your tweets in the usual manner.