Which Android Launcher Is Right For You?

Being relatively new to the Android Market (alright, I'll admit it, this is my first Android phone), I am thrilled with my recent experience with the Android operating system (OS). The thing that struck me the most is the insane amount of customization.

While I still have a lot of Android nuggets of wisdom to learn, one aspect that really caught my attention and fascination is the many launchers that are developed for Android OS, which essentially allow you to change and customize your user interface (UI). Of course what really interested me was the ease at which I could install these launchers.

To change the UI on the iPhone or Windows Phone 7, you would have to jailbreak or perform some similar "risky" operation to your phone's OS that would usually break your phone's warranty. And even then, you couldn't be sure that you would actually like the UI. With Android OS, you simply download the different launchers from the Android Market, install it, and see if you like it. You can delete it completely from your phone if you don't; no harm done. 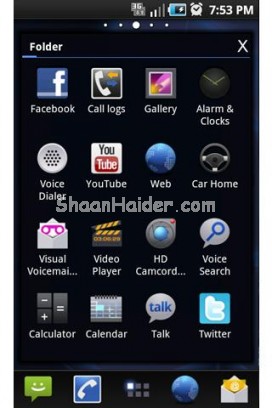 Many of these launchers are free too, although most of the reputable ones come at some form of cost, be it paying for the launcher itself or paying for widgets. The only downside to having all these launchers at my fingertips is deciding which one to use (and let's admit it, that is not a downside), but here are two that really stood out.

The ADW launcher is feature-rich and very customizable. With ADW, you can add and subtract screens, customize the docking bar, and much more. What I liked best about ADW was its huge amount of free themes that will instantly give your phone a new look. In addition to the free version, there is also an ADW Launcher EX which costs $3.33 and adds extra goodies like different app drawer behaviors, desktop transitions, and icon tweaking. Personally, I was pleased enough with the free version not to bother with the paid.

As for customization, I found that ADW seemed to have more options than its ever-popular competitor, LauncherPro, but with that level of customization comes waves of confusion. I recommend reading guides and watching videos about setting up and customizing ADW, and from there, I'd say you're set. I do recommend ADW over LauncherPro if you're into the hulky, customizable launchers.

Zeam is a very stripped-down, light-weight launcher. It takes up very little space to download and also doesn't use much memory at all, making this a great choice for older phones. Zeam works well out of the box, has a minimal aesthetic, and does what I want when I want. It just has a great, quick feel to it. This definitely ran the smoothest of all other launchers, which makes sense for its sleek size and resource usage.

Of course, with this simplicity comes the cost of customizability. Zeamis not very feature-rich, and those looking to overhaul their whole home screen and dock should look elsewhere. Also, in a recent update, Zeam got rid of scrollable widgets, which led many to uninstall the launcher.

I ultimately decided to go with ADW because my phone was more than capable of handling it smoothly, and I am a tech freak when it comes to customization. For those who have older phones or would rather use something out-of-the-box, Zeam is a great choice.

Also, keep in mind that these launchers often change in comparison to each other with each update. Some updates, such as the one that got rid of scrollable widgets with Zeam, actually make launchers worse for some users. I definitely recommend experimenting with a variety of launchers and finding what works best with your phone and workspace habits.