The Most Expensive Gadgets Ever

If you won the lottery, you might splash out on a high-spec TV. You might spend a few thousand even, but would you ever spend $130,000? There are some people who would, simply because the TV is also plated in white gold and 160 20-carat diamonds. Granted, the world’s most expensive TV also has great pixel resolution and a fantastic contrast ratio but with all that sparkle on display on the YALOS Diamond LCD TV, one might become somewhat distracted from the latest episode of Eastenders.

If money is no object, there is plenty to be adorned: who said bling was meant for jewellery alone? Here are just a few of the world’s most expensive, and ever so slightly unnecessary diamond-encrusted gadgets. 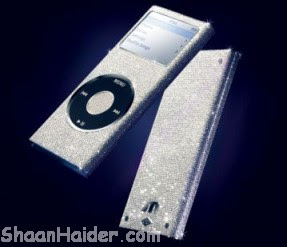 The Most Expensive Gadgets Ever

The Selfridges diamond-encrusted flatiron is a hair straightener made of 18 carat white and yellow gold and has six Dutch Rose-cut diamonds on it. This limited edition weighs in at £9,500.

The Casa-Gi earbuds with 118 diamonds are gold plated with 18 carat gold and have 59 diamonds on each bud. The earphones will certainly stand out on the tube and cost a mere $5,253, although it might be wise to avoid taking them out in daylight if you want to get home in one piece.

For those among us with credit limits worth more than the average family home there is alwasy the credit card for the fabously wealthy among us. It's made by GK Power for the patrons of Dubais first bank and has actual diamonds and a silver strip embedded within it. With a 1.65 mm and 1mm diamond in it you would of thought that would be enough, but they have also done a limited edition Gold Card. That's only available to the members of the Royal Families in the Middle East though.

Mac McBurney of MacDaddy's Fishing Lures created the Million Dollar Fishing Lure. Composed of three pounds of gold and platinum, each of the lures were also encrusted with 100 carats of diamonds and rubies totalling 4,753 stones in all. At over a foot long, and it was designed for extremely wealthy big-game fishermen.
The Diamond iPod, which was a one-off design hand made by the Norwegian jeweller Thomas Heyerdahl, was auctioned off for charity in March 2008. The gadget’s estimated worth was $30,000. It was covered in 18 carat white and pink gold and 430 diamonds and was the only one made of its kind.

Aspreys of London have commissioned the $25,000 Game Boy. Made of 18 carat solid gold with diamond accents on the control buttons and pavéd diamonds set around the display screen, it will go some way to assuring people that you are playing the Game Boy because you really love it, and not because you can’t afford a newer, less obsolete hand-held.

A Swiss manufacturer of bespoke computer mice now offers the world’s most expensive computer mouse: a diamond-studded version costing around $25,000. If that doesn’t quite tick all the bling boxes, it’s also possible to add a white gold trim.

And let’s not forget the pampered pooch. The diamond-studded pet MP3 player allegedly responds to your dog’s moods and “encourages physical movement”. All this and it is encased in 18 carat gold. A mere snip at $1,000.

This article is provided by Ethical Diamond specialists IngleAndRhode.co.uk. If you are interested in some bespoke jewellery such as engagement rings then they may well be able to help you out.