Google's foray into the smartphone market has been rather impressive since inception. With each iteration the Nexus grows more features, better technology, and increased stability. Considering how well the Nexus S performs, however, it's hard to conceive of a vast improvement the next time around. The following attempts to make such a comparison, pitting the popular Nexus S against the upcoming version, Nexus Prime. 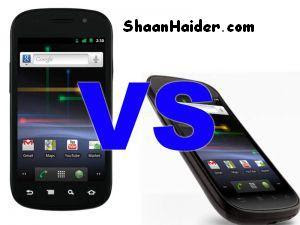 The Nexus S has been celebrated for its comfortable and compact dimensions. The curved chassis and screen are a major contributing factor to its ergonomics, and make it far more desirable to hold than its measurements suggest. The lightweight plastic is visually a bit cheap but trims significant weight.

The Nexus Prime is rumored to have a button free countenance and a 4.7 inch display. The larger display will make it less portable than the Nexus S, although its likely the build quality will be similar.

The Google Nexus Prime has a larger screen, but it remains to be seen whether that will translate to better pixel density. The Google Nexus S has an impressive 233 pixels per inch (ppi) and Samsung's Super AMOLED display. Although plenty of manufacturers are promoting larger screens without increasing the resolution, if the Nexus S and Galaxy Tab are any indication, the Nexus Prime will push quality as their selling point.

The Nexus S is a capable device with its 1GHz processor and 512MB RAM. Yet as advances in technology move swiftly, the difference between one model and the next can be rather significant. As a next generation smartphone, the Google Nexus Prime features a dual core 1.5GHz CPU and 1GB RAM. Supplement that with a PowerVR SGX540 GPU and the Nexus Prime figures to be a monster.

Ice Cream Sandwich is the next stage in Android's open source platform. Taking the best elements from previous incarnations and omitting poorer functions, Google has stated that Ice Cream will present a fuller mobile experience for both smartphones and tablets.

Currently, the Nexus S runs Android Gingerbread, but should eventually receive an update to the more advanced operating system.

The Google Nexus S offers a suitable 5 megapixel camera with geo tagging, LED flash, and auto-focus standard in most smartphone cameras. For video calling, it provides a front-facing VGA camera.

In anticipation of video calling becomes more prevalent, the Nexus Prime has increased the quality of its secondary camera to 2 megapixels. Yet it still contains the mediocre WVGA video capture in the Nexus S, and even a software update to 720p is hardly attractive considering the competition.

As a next generation device, the Nexus Prime is naturally a more impressive device than the Nexus S. The question is whether the improvements will be enough to justify the price differential, especially given some areas such as the camera and software will hardly be an improvement once the Nexus S updates to Android Ice Cream. Nevertheless, the dual core processing power alone should give the Nexus Prime more functionality for multi-tasking and graphics intensive apps.