With an array of launchers now available on the Play Store such as ADW Launcher Ex, GoLauncher EX, LauncherPro, etc. it becomes difficult for the average Droid owner to figure out which suits him the best, performance wise and a little Bling-Bling wise too.

Samsung Galaxy Ace is a high-end Android smartphone and it comes installed with Samsung's default launcher i.e. TouchWiz 3.0 which is considered as an everyday use launcher. It is simple and consumes less amount of resources but is not that great when it comes to appearance.

I have personally used TouchWiz 3.0 and i really hate the app drawer, it does not use a background image i.e. displays black colour by default. The icons are ok, but they are not glossy and the launcher doesn't display the correct icon for certain apps.

The real TouchWiz i got to see is when i saw the launcher in Samsung's newest Android smartphone, the Galaxy S III. The icons are simply superb especially the internet icon and gallery icon, also the app drawer uses your homescreen wallpaper as the background image. The app drawer is also arranged in two tabs namely All and Recent, so that you can quickly jump off to the app you used most recently. 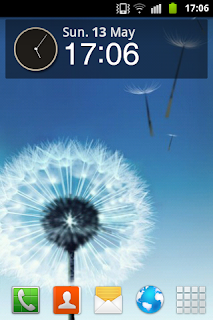 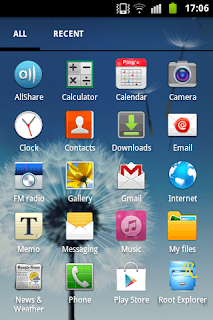 The TouchWiz version used in this smartphone is 5.0 and fortunately you can install this launcher onto your Samsung Galaxy Ace device safely to get the S III experience. A well known XDA developer who goes by the screen name CoolCatGetHome has successfully modded the standard TouchWiz launcher to look like the launcher from S III.

It is completely free and is available in the form of an apk so that you can easily install it as an app on your smartphone. The download link is attached at the end of this post and is completely safe to download, it has been tested with an antivirus. Also please visit the official XDA thread from the link below if you have any questions about the app.

Just download the app and place it on your sd-card, click on the apk file and the install will finish. Now press the Home button on your device to choose which launcher to use, select the launcher you installed and you should be good to go.

If you want to make it as the default launcher simply check the Use as default box.

Note: Please note that this launcher is not officially released by the Samsung people, it has been only recreated for your personal experience.


Did you like this article? Please post your comments and your personal reviews on how you found Touchwiz 5 to be. Also if you have any questions about the installation of this app, let me know!


Witten by Gautam Doddamani who blogs at his official site REVTHATUP.com and is a technology enthusiast. In his past time he loves to code and also test out new custom ROMs on his Droid. By the way he tweets a lot too, follow him on twitter @Crysislevel to get to know him.