In the previous post, we have already covered about the launching of the Huawei P8 Max which is having a huge 6.8 inch full HD screen, 13 MP camera, 3GB of RAM, 64bit 2.2 GHz octa-core processor and Android 5.0.2 Lollipop OS. In the very same event, Huawei also launched the Huawei P8 which is very much similar to Huawei P8 Max and even score more in some aspects.

The highlighted features of Huawei P8 64-bit octa-core HiSilicon Kirin 935 processor, Android 5.0.2 Lollipop OS, 13 MP primary camera, 3GB of RAM and 5.2 inches full HD screen. Since the screen of Huawei P8 is having the same resolution like P8 Max but it is small in size, so it will have the better display quality. 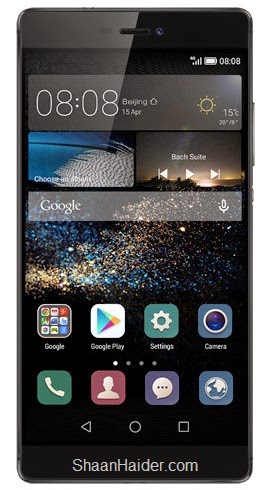 Huawei P8 comes with a full-metal unibody, 6.4 mm thickness and special nano-coating which makes it splashproof. According to Huawei, P8 is having the best screen-to-body ratio of 78.3% and the world's first 13MP phone camera sensor capturing light in RGBW (red-green-blue-white) pattern to better low light photography along with the Optical Image Stabilization. Huawei P8 also boasts dual antennas, so your calls and data connection are not affected in any way.

The full list of all the features and hardware specs of Huawei P8 are given below.

- Corning Gorilla Glass 3 Protection on Screen and Back Panel