There are lots of smartwatch available in the market these days and big smartphone brands like Apple, Samsung, Motorola, LG etc are coming out with their own smartwatch. Recently we had the opportunity to try our hands on the Martian Notifier smartwatch and we are going to share the hands-on review of the device here with you.

Martian is a brand which specially produces the smartwatch only unlike the rest of the smartwatch which are products of smartphone brands. This hands-on review of Martian Notifier is divided in separate section considering the pros and cons of each of them. Have a look on the Martian Notifier smartwatch review below and feel free to share your view in the Comments section.

Martian Notifier comes with a small but beautiful and rich looking retail box showing few of the highlighted features and functionality of the device. Inside the retail box, you will find a plastic case and the Martian Notifier smartwatch inside it. In a small box, special USB cable is provided to charge the device and there is a Quick Connect Guide also provided as the user manual.

You can watch our unboxing video of Martian Notifier smartwatch below.

Martian Notifier smartwatch does not look like a smartwatch from any angle at the first glance. There is an analog and physical dial in the device. The fifth, sixth and seventh hours are replaced by a small OLED display which shows the notifications. There is a crown to manually adjust the time just like a regular watch.

There are two buttons given as well which are used to turn on/off the device and to use various features like launching voice commands, changing the settings etc. There is a small LED notification light is given right above the OLED display which let user know that there is a notification waiting. The watch glass is touch sensitive and can be used to dismiss incoming notifications, dismiss notification history, or recall last notification etc. 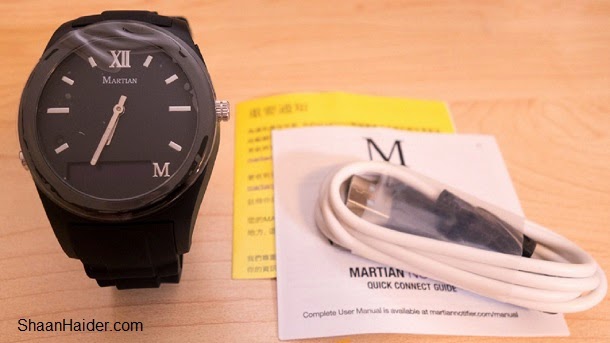 The belt is soft and comfortable for the daily use and is also replaceable. So, you can use different colors of bands with Martian Notifier smartwatch to suit your mood and looks.

Though the Martian Notifier is marketed as a smartwatch, it is not a full fledged smartwatch. As the name suggests, Martian Notifier is a watch which let you check all of the notifications coming on your smartphone to your wristwatch. There are two batteries in the device. The watch clock has its own 2-year battery and there is another battery for smart functions. Unlike other smartwatches available in the market, the watch clock still works even if other battery is not charged.

The good thing about Martian Notifier smartwatch is that it supports nearly every smartphone apps and games. So doesn't matter if you are a social media junkie, gaming lover or productivity concerned businessman, you will get all the required notifications. You can manually select for which apps you would like to receive the notification instead of getting them all the time from all of the apps. You can also use the DND Status option to stop all notifications except silent alarms. It let you scroll through the last 10 notifications received by pressing both buttons at the same time to recall, then use up or down buttons to review them.

You can also set custom vibration patterns for each of the alert type so that you know without even looking at your Martian Notifier or your phone that which kind of notification you received like SMS, email or some app. This is really a time saving and productive feature of the device. You can tap the glass on your watch within 5 minutes to bring back the most recent notification. The option of Vibration Intensity Control lets you set the strength of the vibration according to your need.

Martian Notifier can be used as a silent alarm which alerts you with the vibration only. It is a nice feature if you do not want to disturb rest of the guys around you with an alarm tone. You can set up to five alarms at a time. Once synced with your smartphone and timezone defined in the settings, Martian Notifier also let you see the World Clock time on its OLED display along with the weather information.

You can launch Siri, Google Now or S-Voice on your smartphone allowing you to give commands and hear responses through your phone’s microphone and speaker using the useful commands like “read text”, “send message”, “make a note”, “set a calendar event”, “will it rain tomorrow”, “navigate me home” etc. But keep in mind that Martian Notifier only launches the personal assistance app on your smartphone, it doesn't actually give commands to them. So this feature is only useful when your phone is close to you but you can't touch it, like while driving or working in kitchen.

Using the Camera Mode, you can remotely control your phone’s camera shutter from Martian Notifier. It is really a nice feature for all selfie lovers. Small LED Light option let you use the LED of the device as a tiny flashlight. There is also a Martian Leash feature which is similar to NFC tags and reminds you if you go away from your smartphone. And then there is the Find Phone feature which let you ring your phone to find it.

As already mentioned above, there are two batteries in the Martian Notifier smartwatch. The one used in the analog watches is having the lifespan of two years and the one is what we need to use for smart functions. Once fully charged, the smart function battery easily survives for around four days. But if you receive huge amount of notifications and the vibration intensity is high, the battery will drain fast.

The biggest drawback here is that you need to carry the special USB cable everywhere to charge the device as the device does not support the standard shape of the USB cable slot. If somehow you lose the cable, you will not be able to use the smart features of the device.

Martian Notifier smartwatch is a nice device with lots of useful features and functionality. The design is nice, it can be used separately as a watch only as well. The price is very competitive too. The fact is that it does not have a full digital display, pedometer and direct voice commands features like the high end smartwatch but again, Martian Notifier is designed to provide you the notifications along with some useful features only.

So if you do not fancy having a full fledged and expensive smartwatch and just looking for the productivity then, Martian Notifier is the device for you.