Along with the the latest Nubia Z17 Mini smartphone, Nubia also launched the NeoAir VR at the very same event. NeoAir VR is Nubia's first 360-degree camera and it is able to record 360-degree panoramic videos and photos.

Nubia NeoAir VR comes with two 210-degree fish-eye lens to capture the 360-degree images and it can be connected to a smartphone as well through USB Type-C port. Then user can easily preview the images or videos captured using the dedicated app provided.

The 360-degree camera features a plug and play interface using USB Type-C port provided and it doesn’t use use any wireless medium for connectivity like Bluetooth or WiFi Direct. 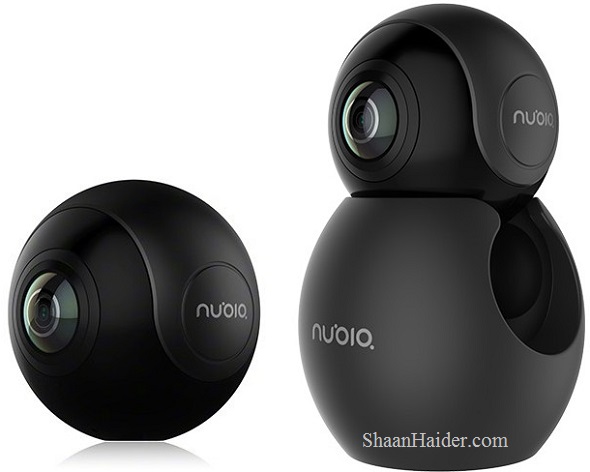 The minimum requirement to connect and use the Nubia NeoAir VR camera with a smartphone is a phone with Android 5.1 or later OS version, minimum 2GB of RAM, Qualcomm Snapdragon 600 / 800 series or MediaTek Helio X series, Exynos 7410 / 8890 or Huawei's HiSilicon Kirin 9xx series of processors. Currently the iPhones and Windows Phone devices are not supported by the Nubia NeoAir VR 360-degree camera.

According to Nubia and based on the above minimum hardware requirements of the Android smartphone, some of the compatible Android devices for Nubia NeoAir VR are Xiaomi Mi 4c, Huawei Mate 7, Mate 9, P10 and P10 Plus, Meizu MX5, Vivo X7, Nubia Z17 mini, Nubia Z9 Mini, Z7 Max and many more.

Nubia NeoAir VR sports a compact design and small body. Due to this, it weighs just 26.5 grams. Few of the highlighted features and specs of Nubia NeoAir VR Panoramic Camera (CP1001) are given below.

The price of Nubia NeoAir VR 360-Degrees Panoramic Camera is US$ 101 and there is official information provided yet regarding the availability of the device.