Like air, water and food, connectivity is one of the most important part and into every aspect of our lives. That is why, Huawei is working hard and initiating many projects for "A Better Connected World".

Huawei is a key player in the Information and Communications Technology (ICT) industry and it uses cloud computing, 5G, and the Internet of Things (IoT) – to build a Better Connected World and drive global sustainability. Huawei has just released its CSR Report 2016, highlighting the initiatives and achievements in the last calendar year. 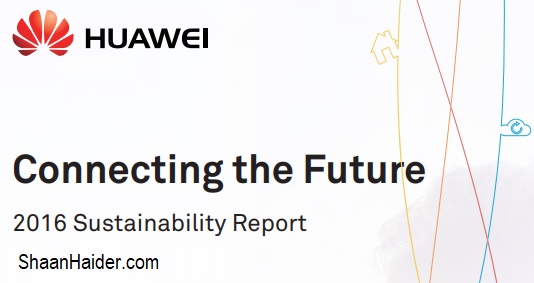 In 2016, Huawei ranked first among Chinese private enterprises with the Highest CSR Score of 88.6 competing against scores of 16 key industries such as electricity, banking, and food.

Few of the highlights of Huawei's Sustainability Initiatives in 2016 are :

- In the Arctic Circle, deployed a 100G submarine network to fulfill the communications needs in Greenland

- Huawei supported the stability of over 1,500 customer networks worldwide

- Huawei reduced the carbon emissions per unit of sales revenue by 20.6% in 2016 with respect to the benchmark year

Below is an infographic showing the Huawei 2016 Sustainability Report at a glance with most highlighted points and achievements grouped in various categories. You can also read the full report by visiting the link given below.

Wanna Embed This Infographic in Your Blog Post? Copy and Paste the Code Given