The most popular thing about Nokia 3310 is the simplicity this device brings to the user serving the most basic purposes of mobile phone without making fuss about other flashy things.

But seems few people love flashy things always and what can be better than to convert a Nokia 3310 into one of the most luxurious phone ever? 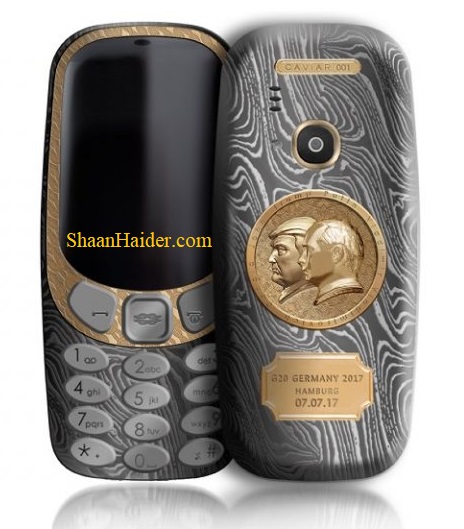 Caviar, a Russia based company, came with the idea of giving the Nokia 3310 2017 a luxurious makeover. This special edition Nokia 3310 2017 sports a titanium body making an already super strong phone even stronger. It is also coated with the “Damascus Steel” pattern.

And surprisingly Caviar went political and has made this special edition Nokia 3310 2017 a Putin-Trump edition, to celebrate the meeting of Trump and Putin at the recent G20 2017 summit.

The back of the device has gold-plated portraits of US president Donald Trump and Russian president Vladimir Putin in a circle resembling a coin. The venue and date of the G20 2017 summit is also mentioned on the lower back of device as the meet-up moment of the presidents.

Caviar stated about this special edition Nokia 3310 2017 that the gold plaque containing the portraits of the two presidents on this device symbolizes their “common desire for progress in US-Russia relations”.