The RedMagic 5G has officially launched in China, bringing a new standard of mobile gaming with 5G internet connections, 144Hz screen refresh rates, and the latest in advancements in RAM and memory technologies.

It features a biometric ​In-screen Fingerprint scanner​, 6.65-inch AMOLED ESports Display with the world’s first ​144Hz refresh rate ​on a gaming smartphone. This amazing 144Hz refresh rate is possible thanks to RedMagic’s collaboration with Visionox and the powerful capabilities of the Adreno 650 GPU that will bring smoother gaming experience on optimized games in particular like Real Racing 3.

With the latest ​Qualcomm® Snapdragon™ 865​, the RedMagic 5G has the most powerful CPU and GPU available that is also ​5G compatible ​and has SA+NSA dual modes to support all key regions. This way, you will always have not only the fastest and most stable connections, but also the lowest latency so you are not only loading into the game super fast, but experiencing no lag so you can stay ahead of the competition. 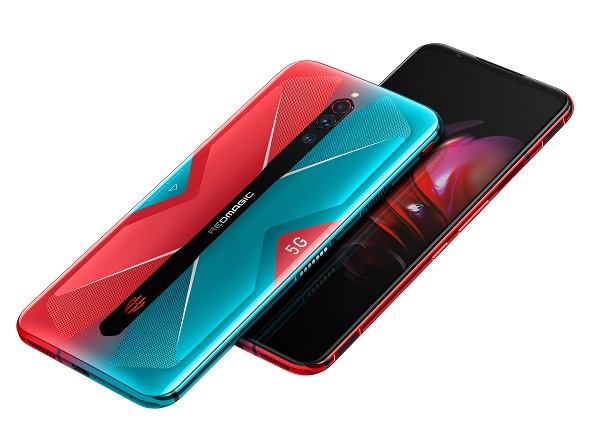 Packed with up to ​12GB of RAM using the all-new LPDDR5 and up to​ 256GB of storage on the new UFS 3.0​ which is 83% faster than previous models, the RedMagic 5G can leverage incredible speeds and data transfer speeds of 5500Mbps, 1.5 times faster than the previous generation.

Boasting a large capacity ​4,500mAh battery and up to 55W fast charging with specific accessories. Adopting a single cell battery system instead of a dual cell, the projected life-span of the battery is longer than before. To make gaming more comfortable while charging, the charging cable has an elbow joint to direct the charging cable parallel with the bottom of the phone, making the cable unobtrusive while holding the phone horizontally when charging.

The new ​Active Liquid-Cooling with Turbo Fan 3.0 is 200% cooler from previous RedMagic phones and has increased the airflow volume by 30% to ensure the RedMagic 5G is performing at its best all the time. The ​built-in Shoulder Trigger Buttons ​were also improved to have 300Hz touch refresh rate and down to 2ms touch delay.

The new RedMagic 5G also comes with a​ flagship-level triple-lens camera setup with 64MP Sony IMX686 main camera, along with an 8MP wide-angle lens, and a 2MP Bokeh lens, and a 12 MP front camera as well as making use of photography features such as sensor + Super Night Mode.


Along with the RedMagic 5G, the MVP Operation: RedMagic​, an online campaign was also launched to build international interest in the RedMagic 5G while international customers wait for the global release. During the event, RedMagic will release a series of missions for participants to complete before April 14th. Those that complete all the missions will get a chance to win cool prizes from RedMagic, including the ultimate prize, a brand new RedMagic 5G!