At the top of the stack is the 10th Gen Intel Core i9-10980HK, featuring unparalleled performance across the board with up to 5.3GHz Turbo, eight cores, 16 threads and 16 MB of Intel® Smart Cache. The unlocked 10th Gen Intel Core i9-10980HK processor powers the ultimate laptops for gamers and creators, allowing further customization, optimization and tuning of the CPU’s performance. 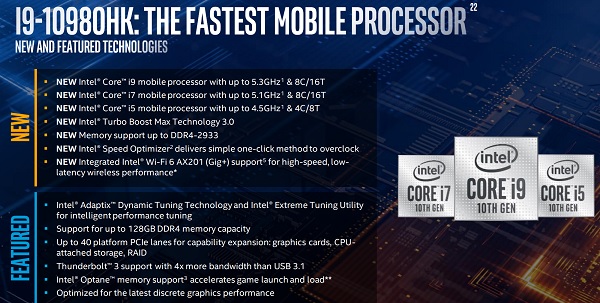 Compared with a three-year-old system, the i9-10980HK delivers:

⦁ Up to 54% more frames per second in gaming for even better playability across top titles
⦁ Up to 44% better overall performance for faster, more responsive productivity users can feel
⦁ Up to two times faster 4K video rendering and export making it faster and easier to create and share

The 10th Gen Intel Core i7-10750H processor with up to 5.0GHz3 Turbo is purpose built for enthusiast gamers and creators demanding optimized performance. Compared with a three-year-old system, i7-10750H delivers:

Engineered in collaboration with leading PC manufacturers, more than 30 thin and light systems measuring 20mm or less in thickness and 100 designs across consumer, commercial and workstation segments will launch this year.

Intel also optimizes laptops with PC makers to support the latest technologies, including:

Today’s introduction of the 10th Gen Intel Core H-series mobile platform extends Intel’s gaming leadership, delivering desktop-caliber performance in a mobile form factor and breadth of choice with more than 100 laptop designs launching this year, including more than 30 thin-and-light systems. The new platform is optimized for enthusiasts and creators by delivering the fastest frequency in the industry with 5GHz across the majority of the volume which will deliver amazing gameplay and rich creation for users.