The Royal Commission for AlUla recently invited travelers from within Saudi Arabia and from around the world to explore several of its landmark experiences using the power of augmented reality (AR).

The Commission worked with Snapchat to release a Portal Lens that transported users into a virtual world through their smartphone - where they could visit Qasr Al Farid, tour Elephant Rock, see a remake of the Air Balloon Festival, and look upon the plains of the grand Nabatean Desert.

The campaign was released nationally in five countries—including Saudi Arabia—and was more broadly targeted at key tourism markets such as the UAE, Bahrain, Kuwait, the United States, the United Kingdom, France, and others. Nearly 600,000 people used the Portal Lens to visit the AlUla sites in the first 24-hours. 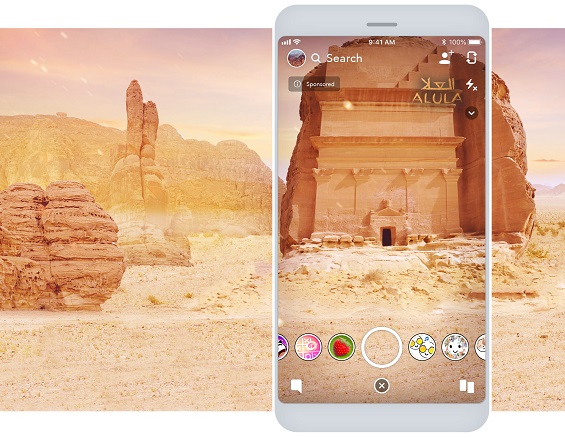 In recent years, the use of AR activations in sectors like tourism and travel has become much more mainstream, with the public able to virtually engage with new surroundings and share those experiences easily with others. The Royal Commission for AlUla has recognized the technology’s potential and had previously worked with Snapchat to showcase artistic work using AR during the Desert X AlUla exhibition held this February.

As a relatively unknown destination, but one that has 250,000 years of stories to tell, immersive technology provides an introduction to AlUla in a way a still picture can’t. AlUla is a transformative experience that has to be seen first hand, but AR is the second best thing to that.

Although many of us have been practicing physical distancing in recent months, this campaign by the Royal Commission of AlUla shows how creative technologies like AR are providing people with a means to keep exploring their world, to express their imagination, and ultimately bring communities together even when they’re apart.