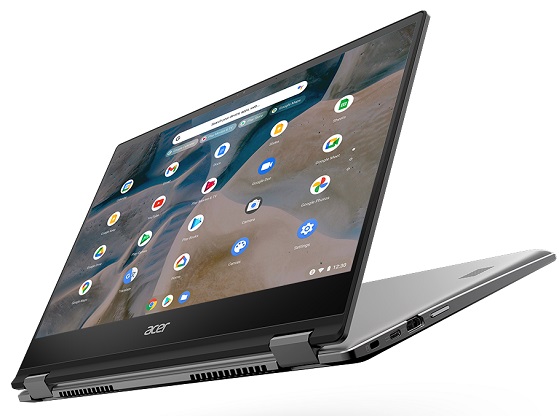 The Acer Chromebook Spin 514’s sleek chassis is made of anodized, sandblasted aluminum and features a stylish diamond-cut pattern on the top cover and touchpad. It not only looks great, it’s also incredibly durable. The device delivers military-grade durability (U.S. MIL-STD 810H compliant) and has a reinforced metal chassis that resists dents, dings, and corrosion. Its chassis is designed to survive drops from heights of up to 122 cm (48 inches) and withstand up to 60 kg (132 pounds) of downward force, so users can spend less time worrying about accidentally causing damage to the Chromebook and more about the task at hand.
Its 14-inch Full HD touch IPS  display is covered with Corning Gorilla Glass, so it resists scratches while providing smooth navigation. The vibrant visuals are rendered even more striking thanks to slim 6.1 mm (0.24 in) side bezels that give the device a 78% screen-to-body ratio. Additionally, an optional backlit keyboard boosts productivity in a range of lighting conditions and features concave keycaps that are comfortable to use, resulting in an overall better typing experience.
The device features a convertible design that can be opened a full 360-degrees, enabling its touchscreen display to be used for collaboration, sharing, presenting or typing in a variety of spaces and environments. It is available in three colors: Pure Silver, Steel Gray and Mist Green.
The new Chromebook has two USB Type-C ports, both supporting USB 3.2 Gen 1 (up to 5 Gbps), DisplayPort over USB-C, and USB charging. It also features two USB 3.2 Gen 1 ports, one featuring power-off charging, and a MicroSD card reader. Select models of the Acer Chromebook Spin 514 also feature an HDMI port for conveniently connecting to projectors during meetings and classes . 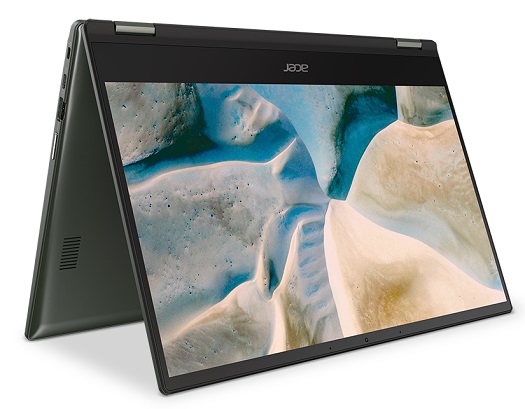 The pairing of AMD Ryzen Mobile Processors with a durable design makes the new Acer Chromebook Spin 514 an excellent choice for users that need to get work done at home. Users will be blown away by the new level of responsiveness and performance provided by the Acer Chromebook Spin 514 with AMD Ryzen Mobile Processors. Plus, the Ryzen 7 3700C Processor offers the best graphics available in an AMD-powered Chromebook , so our customers can take advantage of the growing range of apps and extensions to tackle even more challenging projects