Visually impressive, radically easy to operate and extremely eager to learn: the MBUX Hyperscreen is one of the highlights in the EQS. It represents the emotional intelligence of the all-electric upper-class model: The large, curved screen unit stretches almost the entire width from the left to the right A-pillar. In addition to its sheer size, the high-quality, detail-loving design also provides a "wow" effect. This aesthetic high-tech look is the emotional dimension of the MBUX Hyperscreen.
Added to this is artificial intelligence (AI): With software capable of learning, the display and operating concept adapts completely to its user and makes personalised suggestions for numerous infotainment, comfort and vehicle functions. Thanks to the so-called zero layer, the user does not have to scroll through submenus or give voice commands. The most important applications are always offered in a situational and contextual way at the top level in view. In this way, numerous operating steps are taken away from the EQS driver. And not only him: The MBUX Hyperscreen is also an attentive assistant for the passenger. It receives its own display and operating area.
MBUX (Mercedes-Benz User Experience) has radically simplified the operation of a Mercedes-Benz. Unveiled in 2018 in the current A-Class, there are now more than 1.8 million Mercedes-Benz passenger cars equipped with it on the roads worldwide. The Van division is also relying on MBUX. A few months ago the second generation of this learn-capable system debuted in the new S-Class. The next big step now follows in the form of the new EQS and the optionally available MBUX Hyperscreen. 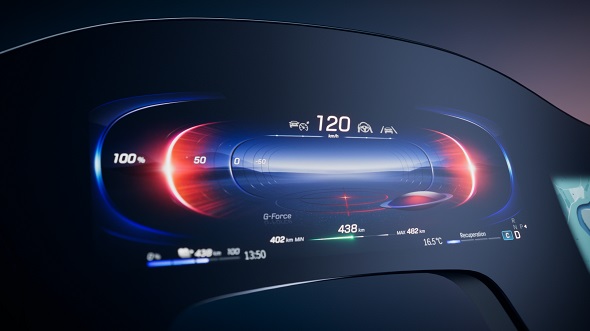 Few of the highlighted features of the MBUX Hyperscreen are as follows ;
- With the MBUX Hyperscreen, several displays appear to merge seamlessly, resulting in an impressive
141-centimetre wide and curved screen band. The area that passengers can experience is 2,432.11 square cm.
- The large glass cover display is curved three-dimensionally in the moulding process at temperatures of approx. 650°C. This process allows a distortion-free view of the display unit across the entire width of the vehicle, irrespective of the display cover radius.
- To get to the most important applications, the user must scroll through 0 menu levels. That's why Mercedes-Benz calls this Zero Layer.
- There are a total of 12 actuators beneath the touchscreen for haptic feedback during operation. If the finger touches certain points there, they trigger a tangible vibration in the cover plate.
- The safety measures include predetermined breaking points alongside the side outlet openings as well as five holders which can yield in a targeted manner in a crash thanks to their honeycomb structure.
- 8 CPU cores, 24-gigabyte RAM and 46.4 GB per second RAM memory bandwidth are some of the MBUX technical specifications.
- With the measurement data of a 1 multifunction camera and also 1 light sensor the brightness of the screen is adapted to the ambient conditions.
- With up to seven profiles, the display section can be individualised for the front passenger. However, the entertainment functions of the passenger display are only available during the journey within the framework of the country-specific legal regulations. If the passenger seat is not occupied, the screen becomes a digital decorative part. In this case, animated stars, i.e. the Mercedes-Benz Pattern, are displayed.

Here are four use cases. The user can accept or reject the respective suggestion with just one click:
- If you always call a certain friend on the way home on Tuesday evenings, you will be asked to make a corresponding call on that day of the week and at this time of day. A business card with its contact information appears, and - if stored - its image appears. All MBUX suggestions are linked to the user's profile. If someone else drives the EQS on a Tuesday night, this recommendation is not made – or there is another, depending on the preferences of the other user.
- If the EQS driver regularly uses the massage function according to the hot stone principle in winter, the system learns and automatically suggests the comfort function in wintry temperatures.
- If the user regularly switches on the heating of the steering wheel and other surfaces for seat heating, for example, this is suggested to him as soon as he presses the seat heating.
- The chassis of the EQS can be lifted to provide more ground clearance. A useful function for steep garage entrances or sleep policemen. MBUX remembers the GPS position at which the user made use of the "Vehicle Lift-Up" function. If the vehicle approaches the GPS position again, MBUX independently proposes to lift the EQS.
Gorden Wagener, Chief Design Officer Daimler Group, said;

With our MBUX Hyperscreen, a design vision becomes reality. We merge technology with design in a fascinating way that offers the customer unprecedented ease of use. We love simplicity, we have reached a new level of MBUX.

Sajjad Khan, Member of the Board of Management of Mercedes-Benz AG and CTO, said;

The MBUX Hyperscreen is both the brain and nervous system of the car. The MBUX Hyperscreen continually gets to know the customer better and delivers a tailored, personalised infotainment and operating offering before the occupant even has to click or scroll anywhere.