Dynabook Europe GmbH has announced that the Satellite Pro E10-S has been chosen as one of a limited number of devices to feature Windows 11 SE – the all-new operating system designed for education – at its launch. The selection of this device by Microsoft further demonstrates the strong relationship between Dynabook and Microsoft in the education space.

Announced in March 2021, the Satellite Pro E10-S is a robust, budget-friendly, and secure 11.6” device, purpose-built for the education sector to optimize the learning experience, while reducing the burden on IT administrators.

The Satellite Pro E10-S has been built with all the essential design features to withstand the tumbles and scrapes of school life. Rubber bumpers protect the device from potential knocks on the move in school bags, while also adding further at-desk grip. 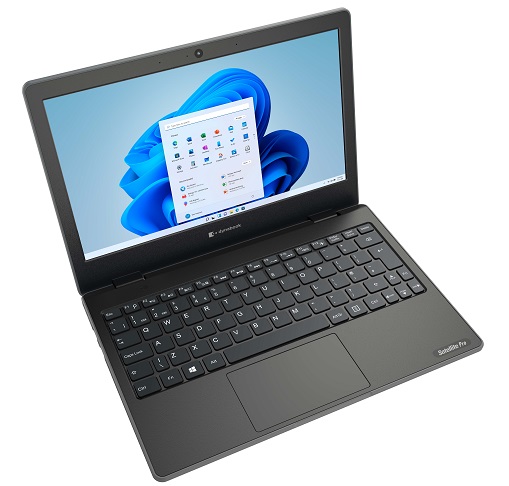 The notebook’s frame has been reinforced to withstand pressure and potential drops from a standard desk height. Strengthened charging port, hinges and newly designed spill-resistant and mechanically anchored keycaps have also been rigorously tested to provide further durability, even after prolonged use. The E10-S can also open 180 degrees for easy screen sharing and to prevent hinge damage from over extension. In addition, with its ‘fan-less’ design, it’ll be a quiet companion in any classroom.

The all-new Windows 11 SE operating system is a cloud-first edition tailored for education, with a focus on students from primary to secondary school. A streamlined version of Windows 11, the operating system delivers simplified experiences, with no distractions, through its Simple Start and app layouts, web-first user experience, and optimised app-windowing. Cloud optimised, the operating system utilises cloud identities only, while user files are saved to the cloud (via OneDrive) and available offline on-demand***.

What’s more, student privacy and security are built-in to support learning anywhere. Windows 11 SE provides comprehensive content filtering and SmartScreen, to complement the E10-S device’s manageability and security features. The device is configured via Microsoft’s Intune for Education, including Windows Autopilot, making it easy for IT education administrators to pre-configure, maintain, and even retire student and teacher laptops with little to no infrastructure.

The Satellite Pro E10-S with Windows 11 SE will be available globally from the first quarter of 2022.