A medical student has been praised for his heroism after saving another man’s life, following a near fatal incident. Saudi national, Faisal Abdullah Mohammed Al-Ghamdi, is being recognized for his quick thinking and using his medical background to properly assist a distressed individual.

Faisal was recognized for his efforts by an initiative known as the LG Righteous Person Award, as LG it has long aimed to create values needed by society through constant interaction with the communities it operates in. and this is one of cultivations is to reward people who are dedicated to social justice through their own willing to spread positive influence, as LG will continue to encourage and support those value members of the society.

This is the second recipient of the Kingdom of Saudi Arabia to receive the award. The first one goes for Mohammad Al Alit a Saudi citizen who act heroically in protecting his community from the fire. 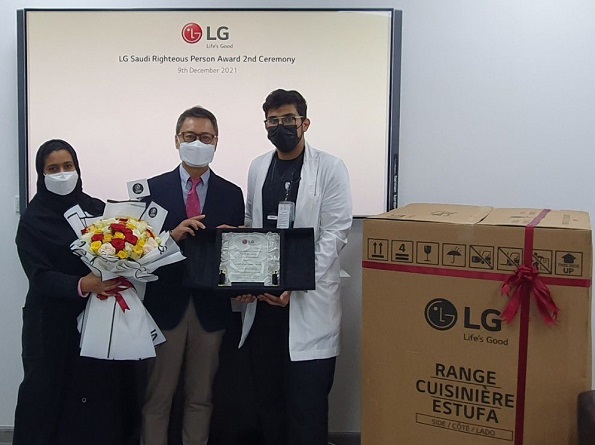 Faisal was returning from a vaccination center where he volunteered when he discovered people trying to help a man who had sustained a serious injury following a hit and run. Faisal used his medical experience to correctly administer medical attention to the injured individual until the proper emergency services arrived. His efforts are attributed with saving the man’s life.

Faisal, who is currently studying medicine at Umm Al-Qura University in Mecca, has also  volunteered at King Adulaziz Hospital where he spent the last month working in the ER. He attributes the ER experience with helping him to gain valuable skills that aided him in his heroic treatment.

At the ceremony where he received his award at LG headquarters in Jeddah, Faisal Abdullah Muhammad Al-Ghamdi said;

I felt very proud and accomplished because I was able to help save someone’s life by God’s will. The man was in a dangerous condition, he was bleeding and people were trying to move him the wrong way, unfortunately, they did not have the medical and first aid knowledge to help with such a serious injury. I would like to thanks my parents expressing their interest in me, they are the ones who always supported me. I hope everyone learns first aid because it is not limited to doctors and paramedics, but everyone should learn it because we do not know when we face a dangerous case may need urgent intervention.