As a forerunner in sustainable product development including its Green PC line and other industry-fronting sustainability initiatives under the umbrella of ‘Earthion’, Acer is also celebrating their three decades of existence in the region by pursuing eco-consciousness for the community at large. This April, Acer is giving back to the community through several initiatives including desert cleaning, supporting and sponsoring an animal shelter, gifting Ramadan iftar Eid Boxes, donating pre-loved clothes and other items to those in need, tree-gifting, and e-waste recycling to help protect the planet.

In 1993, shortly after its entry in the Middle East market, Acer started offering the first 'Collect and Drop' service in the UAE. By 1994, the company had established its first PC assembly factory in the region - another first by any international company in the UAE. Over the years, Acer has been recognised with a number of awards and accolades including UAE SuperBrand Award (2003), Dubai Quality Award for manufacturing and overall organizational excellence (2006), MRM Business Award for Manufacturing by Dubai Chamber of Commerce and Industry (2007), UAE SuperBrand Award (2008). In 2020 and 2021, Acer was announced the 2nd runner up for Arabia CSR Awards for Small Business for having sustainability in its DNA. 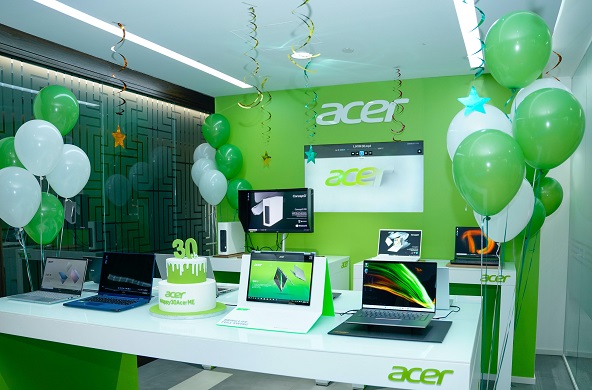 In 2008, Acer celebrated its first Acer Partner Week, which has since then become a major industry event. In 2015, Acer was the first to launch the Chromebook in the region, which was extremely well-received. Over the decades, Acer has ensured the latest innovations from the company were always launched in the region, including its popular Predator hero products.

Acer closed the first quarter with a remarkable 116% growth in year-over-year net revenue for Acer Middle East. In the same period, Acer also successfully increased net revenues for gaming products including desktops, notebooks, and monitors by 83% in the region. Additionally, Acer’s market share for its popular gaming notebooks stood at 18% till Feb 2022 in the UAE as per GfK and 16% for the same period in KSA.

While celebrating three robust decades in the region, the conglomerate has highlighted plans to further strengthen its business in the KSA and UAE markets and also expects growth in its other key markets including Egypt, Iraq, and west and east Africa. Acer is aiming to further solidify the consumer business and maintain leadership in the sector while having a keen growth-oriented approach.

Over the last three decades, Acer has gone from strength to strength in the Middle East and Africa region. Acer is deeply entrenched in the market with a growing number of patrons who are loyal to the group and its products. Over the ensuing months, we intend to strengthen our efforts in the region further and consolidate the company’s position - particularly in the UAE and KSA markets.

Acer has truly lived up to its motto over the years of being a global company with a local touch. We are proud to say that Acer is building a legacy in sustainable technologies and continues to work hard to consistently reduce its ecological footprint. Over the last three decades, Acer has developed a rapidly growing customer base that recognises the company’s products and acknowledges its ethos and transparency. This is why Acer continues to remain a market leader in the industry. We are confident that the future will be even more bright.