The smartphone giant will work closely with UEFA to highlight inspirational moments on and off the pitch, helping fans watch, hear and share them during the 2022-23 and 2023-24 seasons. 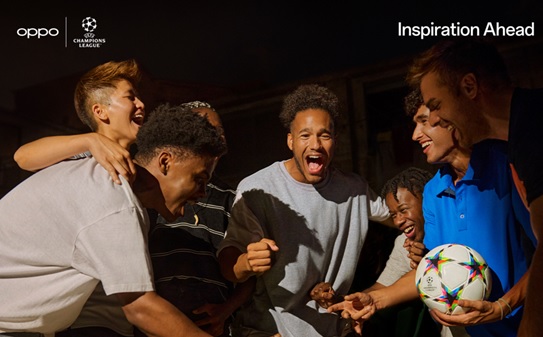 As part of this partnership, OPPO will have a wide reach, appearing on broadcast backgrounds in stadiums, including large-scale ambient ads, the website and social media of the Champions League. In addition, OPPO will offer football fans a unique opportunity to go side the pitch throughout the UEFA Champions League season and capture key moments using OPPO smartphones. Moments of inspiration captured during matches at OPPO Gallery will be shared on OPPO's Champions League website and OPPO Champions League landing page.

The partnership will also see the emergence of OPPO flagship devices, such as the Find series and Reno mobile phones, with its advanced imaging NPUs, MariSilicon X, along with new and upcoming OPPO IoT products such as OPPO headphones and OPPO smartwatch. These products will help inspire football fans around the world as they enjoy a whole new way to experience the UEFA Champions League.

This new sponsorship in OPPO's existing sports partnerships aspires to inspire consumers, and OPPO is in its fourth year of partnership with Wimbledon and Roland Garros and is a global partner of the International Cricket Council (ICC), and by partnering with various international sports leagues, OPPO hopes to show its respect to users In different regions and cultures, serving the needs of global users.