The BMW Group is sharing its vision of the future digital experience, both inside and outside the vehicle, at the Consumer Electronics Show (CES) 2023 in Las Vegas. BMW i Vision Dee is the futuristic mid-size sedan with a new and pared-down design language. The name “Dee” stands for Digital Emotional Experience – and that is precisely its aim: to create an even stronger bond between people and their cars going forward. Future digital functions will go far beyond the level of voice control and driver assistance systems we are familiar with today. The BMW Head-Up-Display extends across the full width of the windscreen, providing a glimpse of the next vehicle generation. From 2025 onwards, this innovation will be available in the models of the NEUE KLASSE. The BMW Group has also refined its use of colour-change technology. Having unveiled the BMW iX Flow Featuring E Ink, with the ability to change from black to white, at the last CES, BMW i Vision Dee can now curate its exterior in up to 32 colours.

With its intelligent, almost human capabilities, BMW i Vision Dee accompanies drivers not only through real-life situations on the roads, but also in their digital environment.

The BMW Mixed Reality Slider, in combination with the advanced Head-up Display, is the digital highlight and central operating control of BMW i Vision Dee. Using shy-tech sensors on the instrument panel, drivers can decide for themselves how much digital content they want to see on the advanced Head-Up Display.

The five-step selection ranges from analogue, to driving-related information, to the contents of the communications system, to augmented-reality projection, right up to entry into virtual worlds. In parallel, dimmable windows can also be used to gradually fade out reality. Mixed reality can be experienced in BMW i Vision Dee in an immersive way that engages different senses without requiring any additional tools, creating a new dimension of driving pleasure for the user. 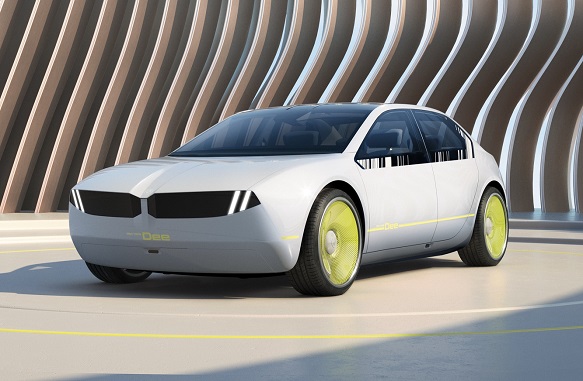 The BMW Group is known in the automotive sector as a trailblazer for the Head-Up-Display and has systematically refined this technology over the past two decades. In BMW i Vision Dee, projection across the entire width of the windscreen allows information to be displayed on the largest possible surface – which only becomes recognisable as a display once it is activated. In this way, the BMW Group demonstrates the huge potential of projection technology and BMW i Vision Dee visualises how a advanced Head-Up-Display could also be utilised in the future for the display and operating concept. The standard-production version of the BMW Head-up-Display extending across the full width of the windscreen will be used in the models of the NEUE KLASSE from 2025 onwards.

The digital experience already begins outside the vehicle, with a personalised welcome scenario that combines graphical elements, light and sound effects. Natural language serves as the simplest, most intuitive form of interaction, enabling perfect understanding between humans and their vehicles. The headlights and the closed BMW kidney grille also form a common phygital (fusion of physical and digital) icon on a uniform surface, allowing the vehicle to produce different facial expressions. This means BMW i Vision Dee can talk to people and, at the same time, express moods such as joy, astonishment or approval visually. BMW i Vision Dee can also project an image of the driver’s avatar onto the side window to further personalise the welcome scenario.

Following the spectacular debut of the BMW iX Flow Featuring E Ink at CES 2022, the BMW Group is now unveiling a full-colour version of the E Ink technology in BMW i Vision Dee that will be used as the outer skin of the vehicle for the first time worldwide.

BMW i Vision Dee, rather than simply alternating between black and white, now showcases a multi-coloured, fully variable and individually configurable exterior. An ePaper film from the BMW Group’s cooperation partner, E Ink, is applied to the body to create this magical display of colour. Up to 32 colours can be displayed.

The body surface of the BMW i Vision Dee is divided into 240 E Ink segments, each of which is controlled individually. This allows an almost infinite variety of patterns to be generated and varied within seconds. The laser cutting process used to trim the films and the electronic control design were developed in partnership with E Ink. The adaptation of this technology for curved surfaces and the programming of the animations, were developed by BMW Group’s in-house engineers – enabling a form enabling a form of customisation that is unique throughout the automotive sector worldwide.

Reductive design – inside and out

The design of BMW i Vision Dee has been deliberately pared down to focus attention on the digital experience and the DNA of the BMW brand. The exterior is defined by the classic three-box sedan design that forms the core of the BMW brand. Traditional design elements, like the BMW kidney grille, twin circular headlights and the Hofmeister kink, are reimagined, with phygital icons replacing analogue elements. This gives BMW i Vision Dee its own digital, but human, character.

Inside, digitalisation goes hand in hand with reductive use of materials, operating controls and displays to ensure nothing distracts from the digital experience and the new feeling of enhanced driving pleasure. The unconventional design of the steering wheel, with its central vertical spoke, creates touchpoints that come to life when approached or touched and can be operated by moving the thumb. These phygital touchpoints control selection of the content projected onto the windscreen and, together with the Head-Up Display, thus support the principle of “hands on the wheel, eyes on the road”.

Another milestone on the road to the NEUE KLASSE

The future of the BMW Group is electric, circular and digital. BMW i Vision Dee represents the digital aspect of this trio and will be another milestone on the road to the next vehicle generation, the NEUE KLASSE. The BMW Group will provide further insights and glimpses of the revolutionary vehicle concept of the NEUE KLASSE over the course of 2023.