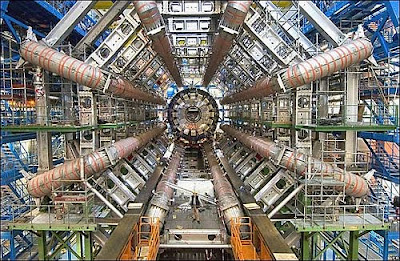 Before starting, the first thing I want to say that I am a so much into theoretical physics, science, space and all. As you can see easily that my above statement is contradicting with the title of the post. Why I am writing this post is that, according to me, the LARGE HADRON COLLIDER project is a big waste of time and money.

This project took more than 2 decade and billions of dollars for completion and now the experiments are started. The best thing is that the result of the experiment is coming positive. This project is for discovering the basic particle existing in the nature and many more stuffs like DARK MATTER, TIME, BIG BANG, RELATIVITY CONCEPTS, PARALLEL UNIVERSE, STRING THEORY and all. But my question is that is this really important to know the secret origin of the universe when our beautiful planet and the life on it is being destructed everyday for many reason?

Few months back, I had a heated discussion on Twitter, with a 60 years old guy who was having interest in space and science just like me. He was saying that all scientific researches and space exploration are justified in any condition. But after listening my points, he accepted that he was wrong. I don't know if he really felt like that or just said that stop the discussion. But what I meant to say here is that how anybody can justify every scientific research being conducted? ....Billions of dollars are being spent on LHC. What will be the benefit of it to the humankind if we know that how the universe generated, how big bang happened. about relativity, black holes or dark matter? NOTHING......

If you are a regular visitor of this blog then you must be having idea about my previous posts SADDEST PICTURE EVER , Help In Educating 40,000 Poor Children Of India and few more. What is the logic of wasting billions of dollar in knowing about the big bang and black holes when people are dying because of hunger, poverty and lack of medical facilities all over the world? Research and experiments in the field of medical science, technology and any other branch of science is justified as it helps in better living of human beings. But even though I am a fan of theoretical physics and spent few hours everyday in studying stuffs of it , I am not so happy with the idea of the LARGE HADRON COLLIDER cause it is not going to change the condition of the poor and hungry people of this planet. A poor, uneducated and hungry does not care if man went to Moon or Pluto is no more a planet cause his life on earth is hell without the fulfillment of basic things of life.... So, for me The Project LHC is of no use. If the very same amount of money and time would be spent on education and welfare of people all over the world then it would be really a different place to live.

I am not going to expand this post more. What i wanna say is that now this time to decide that which scientific projects are important and which are not going to help the humankind as the money being spend on these project , specially space projects, are just so huge that it can help millions of people in a better living..... I would like to know the opinion of you people. Feel free to share your views in support or against of my thoughts.