It's now 2011, where are the laser guns, jetpacks and other cool sci-fi accessories that we expected to see around by now? Well, with the exception of some top secret, multi-million pound military programmes that may or may not exist, we are still not likely to see a real, working light sabre or a magic wand in this life time.

However fear not sci-fi fans, there are still some very cool sci-fi accessories out there today that resemble the real thing in one way or another. Let’s take a look at some of the sci-fi accessories we see on our screens and check out their real life counterparts.

We have all seen those cool devices in Star Wars and Doctor Who where they use a gadget for translating what the alien races are saying to them. Granted this real life version, known as Phraselator, has not yet learnt how to decipher Klingon, but it is capable of translating forty different languages and was originally created for the U.S Military.

The Phraseology has a stack of cool features, a few of which include the ability to customise and build your own language modules, full colour touch screens, auto digital recording, favourites for quick access to commonly used phrases and much, much more.

This very cool looking lighter will not break the bank and will only cost you around twenty dollars. It is an exact replica of the fuel cells which we're used to power the T-800's from the Terminator Salvation movie. Even if your not a smoker, you never know when a stylish flame might come in handy, a must have for any Terminator fan. 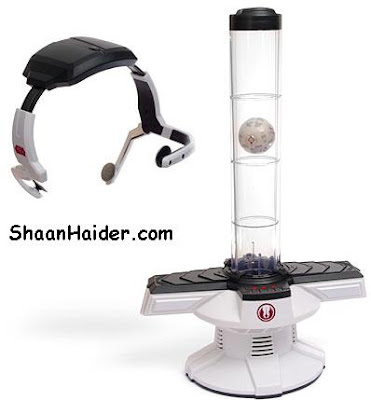 So you want to become a real Jedi-Knight? Well now you can with this Star Wars Force Trainer. Put on a headset and use the power of your mind to work your way through fifteen levels of training that focus on developing your concentration powers, all through the guide of Jedi Master, Yoda. The slightly off-putting thing about this gadget is the fact that it takes 3AAA and 6 AA batteries, but for the hardcore Jedi-Knight wannabe's out there it's a small price to pay to learn the mind power of the Jedi-Knight.

Even though it was never really made clear exactly what this device, from Doctor Who, was capable of, it is clear that it's “sonic” and helped the doctor out of sticky situations time and time again. Some of its common uses, in the TV series, included repairing robots, repairing machinery, rewiring security systems, opening locks, and yes, even tightening screws.

This exact replica of the Sonic Screwdriver requires three LR44 (AG13) cell batteries, which come included, has some cool features which include realistic sound effects, a UV ink pen and a UV light, a standard ink nib and is of course an electronic screwdriver aswell.

This is by far one of the coolest gadgets you could own, if your a Harry Potter fan. Harry Potter may be able to zap the bad guys, squirm his way out of sticky situations and turn people into fluffy bunny's but have you ever seen him switch the TV channels?

With the magic wand remote control you use hand gestures, while holding the wand, and flicks of the finger to take control of your TV, just like a real magician doing real "magic". Completely button free, the wand can be programmed to learn thirteen different infra-red codes from an existing remote or you can use its thirteen pre-defined flicks and swishes to control channels, volume and much more.