I was using the iBall Slide tablet since last few days and now I am going to write a review of it for you all. There are lots of things which I will cover individually in different sections, good or bad.

iBall Slide is having the exact look of a low-budget tablet. It lacks the smooth curves and it is a bit thick and heavy as well. All of the jacks are given on the one side only. You can find the microSD card slot (up to 32GB supported with 8GB of onboard storage), mini HDMI out, USB ports for data transfer, power switch, 3.5mm handsfree, DC charging socket and a microphone. On the top Menu, Return and screen lock keys are given.

iBall Slide is having 1GHz ARM Cortex-A8 processor with Android Gingerbread (2.3) which is the best in its range. Nearly every Android tablet in this range is having Android 2.2 only. The capacitive touchscreen is very responsive and works brilliantly. The device is really fast and smooth even while working with several apps at a time but sometimes it gets hanged also. iBall Slide is having the 8GB internal memory which is expandable up to 32GB.

iBall Slide is not having the built-in 3G but you get the support for the 3G data card if you want. It cab be issue for the many people as the number of 3G subscribers are increasing everyday.

It supports nearly every video format. If not then you can get the help of the pre-loaded UT player. The speaker is in the back and works well for the games and random video play. You get the loud sound while using the headphones but it lacks the quality in it.

The screen is really bright and you get sharp images and video on the screen. iBall Slide screen is having the 800 x 480 resolution which is able to play the full HD (1080p), thanks to the nice 1GHz processor. 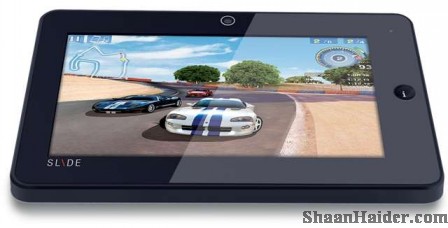 Also, you will enjoy the gaming experience on it. I played few games with great graphics and iBall Slide was good enough to perform the task in a satisfactory manner. The HDMI output is also a good one and performs well.

iBall Slide is having the 2MP front cam which you can use to have video chat on Skype etc. The video quality is not that good because of the 2MP cam. Another biggest drawback is that you do not have any rear cam in iBall Slide to take pictures. It really disappointed me.

As stated officially, iBall Slide is having the mighty 4400 mAh battery which is the biggest in its range but I did not feel the performance up to that. The battery works well but I was expecting really much more than what I got in terms of performance.

iBall Slide is a good Android tablet in its price range and scores over many other Android tablets. If you are not much into taking pictures from the tablet then feel free to go for the iBall Slide