Forget the usual control pad or joystick, now you can play video games using your stream of urine as a controller. Amazing, disgusting, innovative, strange, and comical have been just some of the ways that this latest addition to video game technology has been described. But before you pass any judgement on pee controlled video games, a bit more of an explanation is required.

Now first of all you can’t just buy one of these and set it up at home. It’s designed to be used in public urinals, so it’s definitely for the best that a hand held controller isn’t used here. The idea is to install them above urinals at eye level, so that a short game can be enjoyed while emptying your bladder. No money, subscriptions, voucher codes, or login details are needed. The games are completely free to play and anyone can play them. Well, almost anyone. Unfortunately for the girls, the machine doesn’t have a version for sit-down toilets, so it’s only men that will get to enjoy playing games like ‘On the Piste’ or ‘Hosepipe Hero.’ 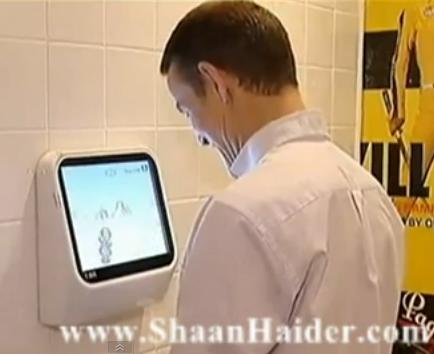 The Company Behind It


The people responsible for bringing such a crazy idea into reality are British company Captive Media. At their office in Essex, Director’s Gordon MacSween and Mark Melford decided they needed to find a way to engage consumers that were turning off from traditional media and advertising. What began was the journey towards creating the world’s first pee-controlled video game.

Why, you may ask? They claim that by grabbing the attention of a man for the minute or so it takes to relieve himself, the video game will engage him enough to make him acknowledge the advertisements the screen displays between games. So the idea is to provide advertising space while giving the players a unique video game experience to keep them coming back for more.

The Technology Behind It


Controlling a video game with your wee isn’t as high-tech as you might think. In fact, no alterations have to be made to the urinal used at all. To start off it uses a tough waterproof case containing a PC with an Intel Atom Dual core microprocessor and loaded with the Windows 7 operating system. On top of that it has a 12-inch hi-definition LCD display screen behind toughened glass, a proximity sensor, and infrared sensors mounted at the bottom of the casing to follow the direction of the passing stream.

When nobody is stood in front of the urinal the screen displays advertisements, but the proximity sensor detects when someone is ready to play and the game begins. The entire game is then controlled by the user moving their stream of urine to the left or right. One of the games available allows you to control a skier down a mountain by directing them left or right to stay on track and avoid obstacles.

Will It Be A Hit?


It’s still to be decided whether Captive Media’s unique addition to the video games market is going to take off or not. They held a trial for the system at a pub in Cambridge that had a mixed response. Some people were genuinely interested by the new machines, and there was no denying that they were fun to play, but perhaps too fun. Imagine if men began frequenting a pub more often purely because they had the devices installed and they could play the games there. That leads onto a problem that could arise from playing video games in the urinal. Maybe people will spend a little more time than they should there, leading to long queues and frustrated visitors.

But that said, the devices are already up and running in England’s capital. At the end of November 2011 the first pub in Britain installed the machines. The Exhibit bar in Balham, South London has had a great response from its customers so far, but it’s still early days. At the moment Captive Media only have a patent for the device in the UK, although they have applied for them in other countries already. However, the signs are looking promising for Captive Media, and it’s likely that a selection of venues across the UK will start installing the devices by the beginning of 2012.