If you feel like being a part of the Jetson era and putting your feet forward into the future (or are just really lazy) why not try Marty McFly's self-lacing shoes? Yes, I know that I'm crossing movie/futuristic references here - the Marty McFly self-lacing shoes are actually based off of the self-lacing shoes in Back to the Future, but just bear with me here.

The original Marty McFly replicas that were made did actually self-lace. Nike actually released another version of the Marty Mcfly shoes in September of 2011 - though they weren't self-lacing, they were as close to an exact replica of the shoes in the movie as humanly possible.

The great thing about the pairs that were made by Nike? Well, they're collectible, and the company only made 1500 of 'em - plus, net profits went to Marty McFly's (i.e. Michael J. Fox) foundation for Parkinson's disease.

Cool, nerdy shoes with a heart of gold - what more could you ask for?

10 Crazy Gadgets You Can Plug into Your Car Cigarette Lighter 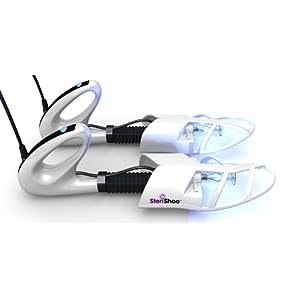 We all have smelly feet - and smelly shoes - but have you ever tried to get rid of that stench?

Yeah. It's not so easy, is it? All the deodorant balls in the world probably couldn't get rid of the stench of sweat out of your gym shoes. But before you throw out your not-so-worn pair of gym shoes because you just can't deal with the smell anymore, try this handy gadget called Sterishoe.

Sterishoe uses UVC light to kill the bacteria that are inevitably living in your shoes, so that you can walk (and run and exercise) happy. As UVC light is somewhat not-so-good for us - as in, UVC light can be damaging to the eyes and skin - there are precautions built into this little cleaning gadget.

Sterishoe won't work unless compressed a little bit and in the dark - but if you want to clean up your grody sandals, there are black-out bags that you can use.

And voila! Now you have clean shoes.

You remember those commercials maybe fifteen years ago for the moon bounce shoes? (If you don't, look them up! They are an amusing reflection of 90's advertising tactics...and music) Well the "Tramp It" are moon bounce shoes for adults. Tramp It could be described as your own personal trampoline...all the time.

While I have not tried these marvelous contraptions myself, I would think that they would have the additional benefit of reducing the impact of running on your feet and musculature in general. While the shoes can be used just for plain ol' fun, they would undoubtedly have some great benefits for cross training.

They'll cost you a pretty penny, though, at about $200 a pair. If you want to feel like you're walking on the moon 24/7, though, the cost is surely worth it.

There are a lot of other shoe gadgets out there too, like:

What gadgets would you like to see incorporated into your shoes?