HOW TO : Backup and Transfer Android Apps to PC or Another Phone

One of the best thing about any smartphone is the smartphone apps. They are the main reason behind the popularity of the Android devices and iPhones. You can download lots of apps on your Android smartphone and tablet but what if you are switching to a new smartphone and want all those apps on the new device? 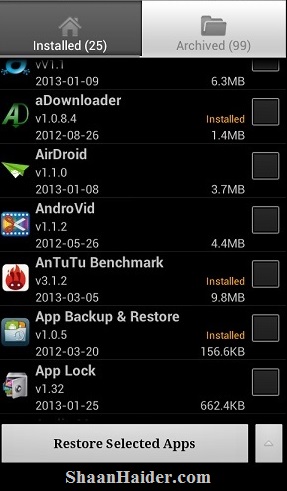 But you will have to download all those apps again which may take lots of time depending on the number and file size of the apps. But there is a little trick using which you can get the apk files of all your Android apps easily. Once you are having the apk files of your Android apps, you can transfer them to any device and install the applications directly without downloading them from the Google Play Store.

HOW TO : Backup Android Apps to Your PC and Transfer to Another Phone

1. Go to the Google Play Store and search for “app backup” apps. You will get lots of such apps. App Backup & Restore is my favorite out of them as it is easy to use and work perfectly. So, download this app and install it on your Android smartphone.

2. Open the App Backup & Restore. Select all the apps of which you want to have the backup. Tap on the Backup button and wait for the backup process to be completed.

3. Now, go to the file manager of your device and look for the "App_Backup_Restore" folder.

This is the default folder where apk files of your Android apps will be saved. You can also select the name and path of the apk files to be saved from the App Backup & Restore settings.

4. Copy this folder to your computer or transfer to any other Android device of your choice.

5. Now, install the App Backup & Restore app on the new phone. Open it and tap on the Archived tab. Now just select the apps which you want to install and tap on the "Restore Selected Apps". All of your selected apps will be installed on your phone.

6. Alternatively, you can also open the apk files from the phone's file manager to directly install that app on the device.