HOW TO : Boot Android Phone in Safe Mode


If you are a Windows user then you must be knowing about the Safe Mode, you will find it in Apple's Mac and various Linux distributions as well, which is used to start the computer in diagnostic mode to troubleshoot the computer by disabling many of the drivers and services.

And you can do the same with your Android device too. Starting the Android smartphone in Safe Mode disables all third party apps installed on the device. By this way, it provides you the device with better performance but less features.

There are many Android apps which always runs in the background. Even if you close them, they will start working again after some time and will use the resources like RAM and battery. So if you do not want to use such apps for a while then, you can start your phone in Safe Mode to get rid of those apps without deleting them.

Also, if your Android smartphone is having issues of crashing etc and you do not if this is because of an app then you can start your Android phone in the Safe Mode to get rid of them and find which app is causing issues.

Have a look on the steps given below to start your Android devices in the Safe Mode in various versions of Android OS.

HOW TO : Boot Your Android Phone in Safe Mode

Safe Mode on Android 4.1 and Later

1. Hold down the power button until the option menu comes out on the screen.

2. Now, long press the Power Off option. You will receive a message on the screen to confirm whether you want to boot your Android phone in Safe Mode or not? Tap on the OK button.

3. Now a warning message will appear to confirm your choice and to inform you that all third party apps will be disabled in Safe Mode. Just tap on the OK option again.

In Android 4.0 and higher, you can also disable an app without deleting by going to the app setting. But you will have to disable all the apps individually. Using the Safe Mode, you can disable all the third-party Android apps in just few steps.

HOW TO : Use Android Phone as Webcam

HOW TO : Backup and Transfer Android Apps to PC or Another Phone

1. Long press on the power button and tap on the Restart option to restart your phone. Or just switch off the phone and switch it on again manually. 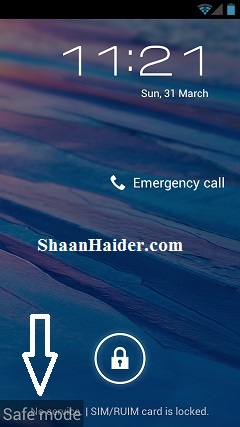 2. When the phone switches on again and the logo of the devices appears on the screen. Press and hold the both volume up and won key together until phone boots into the Safe Mode.

3. Once the phone start totally, you will be able to see the Safe Mode written at the bottom of the screen.

To disable the Safe Mode on your Android phone, just restart your phone normally without following any of the steps mentioned above.