HOW TO : Add Smartphone and Tablet Frames to App Screenshots 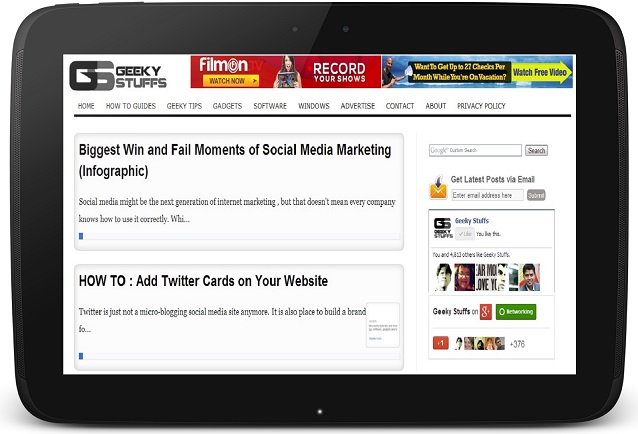 The common approach to do this is to take the screenshot first, grab the image of a desired device and then place the screenshot on the screen of the device. It will take some time and it also needs a little bit of image editing expertise. Another way is that you can directly take the picture of the device showing the smartphone, game or website but it will not good look for sure.

But now, you can do this easily in just few steps. Google provides a service for the Android developers using which you can easily place any image or screenshot on the screen of the provided smartphone or tablet. You can see the screenshot of Geeky Stuffs on a Nexus 10 tablet in the above image. And if you want to create such an image for yourself then, just follow the instructions given below.

HOW TO : Put Screenshots or Any Image on Smartphone and Tablet Screen

1. Go to the Device Art Generator page of the Google Android Developer site from the link given below.

3. Now, check the screen resolution shown for the device you have selected. Give your desired image the exact resolution otherwise the device will not accept the image. Also, the image should be in the PNG format.

You can change the device orientation by clicking on the "Rotate" button. There are also "Shadow" and "Screen Glare" options given which you can use to put the shadow of the device below it and glare on the device.


Posted by Shaan Haider
Categories : Android, Blogging, How To :