HOW TO : Find Who are Stealing Your Tweets

People share inspirational quotes, news, images etc. as status updates and tweets. Sometimes people post something funny and awesome which goes viral by getting large amount of ReTweets and Facebook Share. But not everyone is good with these tools. Those people just copy the content and post from their own profile.

Usually it happens on Twitter that people post someone’s tweet without giving them credit. Though you cannot claim the copyright of a tweet, it is nice to know who is copying your tweet. Now there is an automated Twitter tool available using which you can find the people who are copying your tweets. 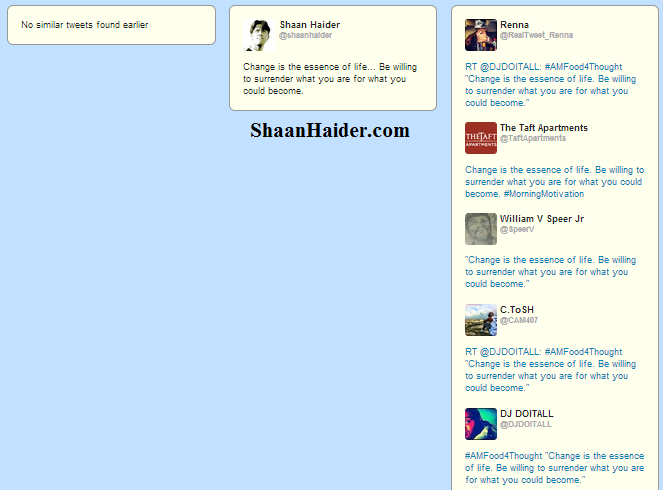 Who Stole My Tweet ( StoleMyTweet.com ) is a useful Twitter tool which let you find if somebody is tweeting your content. It is designed to process last 50 tweets of your profile and matches them with the similar tweets of other users.

It is an easy to use web application and all you have to do is to enter your Twitter username in the given text field or login using your Twitter account. After that it will scan for the tweets similar to your last 50 tweets and will show them as result.

It looks for the tweets posted before your tweet and after your tweet. So if you copied the tweet from someone else then, it shows that in the result as well. Since it only compares the text of the tweet, it also shows the manual and old style RTs of your tweet as a copied tweet which can be considered as a flaw of this Twitter tool.

If you want to check the data for more than last 50 tweets of your account then, you can increase it to 200 tweets by paying a small amount for the premium service.

One more method to find out if someone is copying your tweet is to copy and paste the tweet on the Twitter Search box but it is kind of boring and tiring too. So if you are curious about the content of your tweets then, better to go with the above Twitter tool.