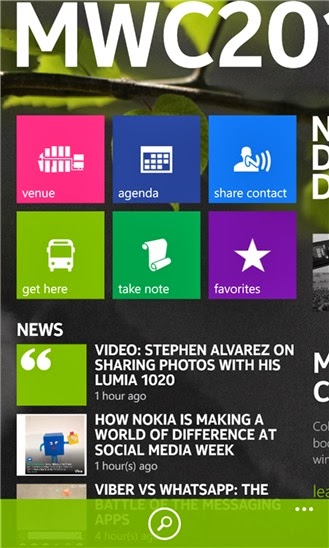 MWC 2014 is the official Nokia MWC app for all the Nokia Lumia devices running on the Windows Phone OS. Attendees can use this companion app as their guide to the Mobile World Congress 2014 in Barcelona, Spain. Nokia MWC 2014 app is having the Lockscreen Support, Push Notifications and also the Instagram support.

The highlighted features of Nokia MWC 2014 app are given below. and the download link of the app is provided at the end of the post.

- You can view the entire list of MWC 2014 exhibitors, speakers and agendas including the tracks for Conference and Nokia ADC.

- You can personalize your favourite exhibitor, speaker and events list.

- Explore the city of Barcelona with the help of built-in Nokia HERE Map, HERE Transit and AR.

- Easily network within the event by sharing your contact information and event detail using NFC.

- Get the latest Nokia announcement and various MWC social media feeds right on your device via Nokia MWC 2014 app.

- This one is for music lovers, you cab listen to songs of local Spanish artists