HOW TO : Install Apps and Games Directly to SD Card in Windows Phone 8.1

SD card plays an important role in smartphone these days as it let us save our images, videos, audio files along with the smartphone apps and games. Yesterday I have posted the tutorial how you can move the apps and games to SD card in Windows Phone 8.1 devices. Using this trick you can free some space in the phone memory of your smartphone.

But this method is applicable only on the apps and games which are already downloaded on the device. If you install any new app or game on your Windows Phone 8.1 device then, you will have follow the entire process once again. So, wouldn't it be nice if all the apps and games could be configured to be installed on the memory card only instead of the phone memory?

HOW TO : Take Screenshot on Windows Phone 8.1

HOW TO : Backup and Reinstall Apps and Games on Windows Phone 8.1

HOW TO : Install Apps and Games Automatically to SD Card in Windows Phone 8.1 Using the Storage Sense

1. Go to the list of all applications on your Windows Phone 8.1 device.

2. Scroll down to the "Storage Sense "and tap on it to open.

3. Now you will see four categories on the bottom of the page as follows :

- Any other downloaded files 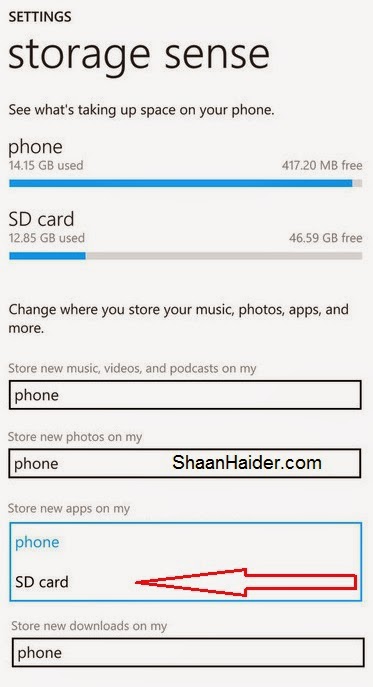 You will find that by default all of them are set to "phone". Due tot this all of these files will be saved on phone memory only.

4. Now, tap on the drop-down menu for "Store new apps on my" option.

5. Select the "SD Card" option from the drop-down menu as shown in the above pic.

From now on, You will be able to install all of your games and apps directly on the SD card of Windows Phone 8.1 device. You can also set the same option for photos, music, videos and any downloaded files. By that way, all of these files will be automatically saved in SD card without occupying any space on the phone memory.


Posted by Shaan Haider
Categories : How To :, Mobile Phones, Windows