Alcatel has previously launched the Hero 1, and continued the success with the second edition of the series by launching the Hero 2, and it seems that the time has come to reveal the third version during the Mobile World Congress 2015.

Alcatel today launched the Alcatel Hero2+, a smartphone which is nothing but an enhanced and improved version of the previously released Alcatel Hero 2. It comes with strong hardware specifications and features. Alcatel Hero2+ sports a huge 6-inch screen with 1080 x 1920 pixels full HD display, 2GB of RAM, 16GB internal memory which is also expandable using the memory cards. Alcatel Hero2+ is powered by a MT6592 Mediatek octa-core processor clocked at 2GHz, and supports the 4G LTE networks. 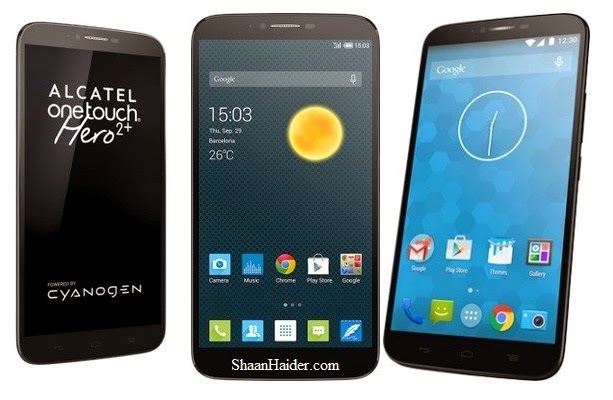 Alcatel Hero2+ is having a 13.1MP primary camera which uses the OIS (Optical Image Stabilization) technology to provide nice images and videos. The front facing camera is 5MP which is good enough for the selfie lovers.. The phone runs on the Android 4.4 system version of Cyanogen OS which can be a great attraction for the lovers of CyanogenMod as you will get the largest in the possibility of customization, privacy, and stability,.

The complete list of all features and specs of Alcatel Hero 2+ is given below.