HOW TO : Create a Complete Clone of An Android Smartphone to Another

One of the best feeling in the world now is to get a new gadget, specially a smartphone. Though it is exciting to have a new smartphone, it is also a bit troublesome as you need to transfer all your contents from previous smartphone to the new one.

If you are having a cloud account and you have backed up content on it, you can download it on the new device but it will take time depending on your Internet speed or you will have to transfer the data manually and install all the apps as well. 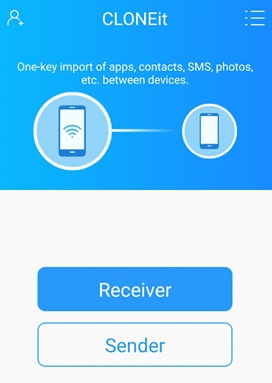 If you are switching from one Android app to another then there is a smartphone app available which let you create the complete clone of your old Android smartphone to the new one. It means you will get all your content, apps, data, contacts, messages including the device settings to your new phone from your phone.

Sounds great? Then just follow the steps given below to transfer all the data, apps and settings to your new Android smartphone and create a clone of your old Android phone.

HOW TO : Create a Complete Clone of An Android Smartphone to Another

1. First of all, download the CLONEit Android smartphone app on both of your devices by visiting the link given below.

2. Now go to the Settings and then tap on Security to open it.

3. Select the Unknown Sources option. You can uncheck it again after finishing the process of cloning of your phone.

4. Now go to Settings again and then to Accessibility. There you will find an option Auto Install, turn it on.

5. Launch the CLONEit app on both old and new Android smartphone. Tap on the Sender button on old Android phone and Receiver button on the new device. The old device will create a hotspot now and the new device will search and automatically connect to it for the communication and data transfer.

6. Once the connection is made, you should be seeing the name of old Sender phone on the new one, just tap on the phone icon of the Sender phone. 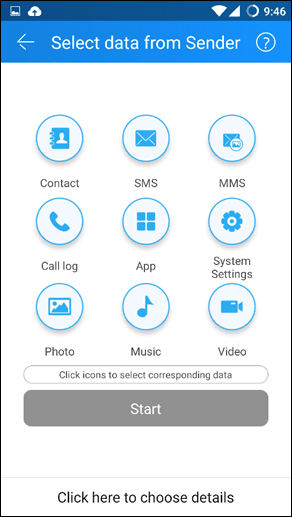 Now, the CLONEit app will show you all the content which you can transfer from one device to another. It consists Contacts, SMS, MMS, Call Log, Apps, System Settings, Photo, Music and Video. You can even select particular content from each category if you want instead of cloning the whole phone.

Tip : If you are going to use the same Google account of the old Android phone on the new one and you were backing up the contacts on Google then, better not to select the Contacts in the CLONEit app for transfer as it will create duplicate contacts in the phonebook of new phone. Also, CLONEit will temporarily change the default messaging app to CLONEit if you choose to transfer messages. It will revert back to old one once the transfer process is finished. 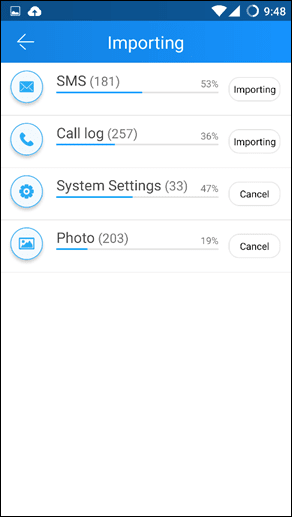 7. Once selected the desired content to move, tap on the Start button and the content will start moving from old Android phone to new one.

Once the process is finished, your new Android phone should be having all the content of your previous phone on it in the exact same manner.